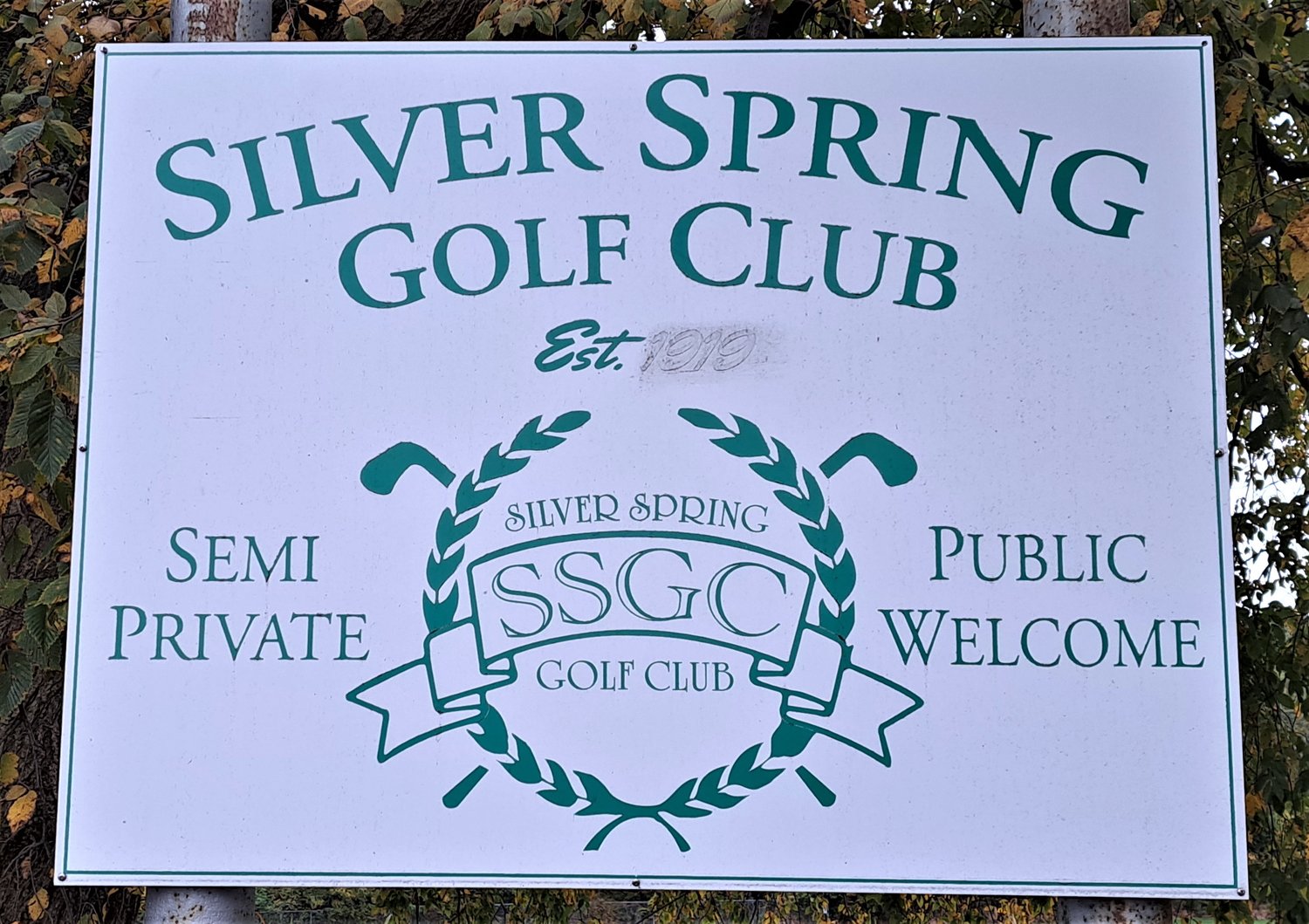 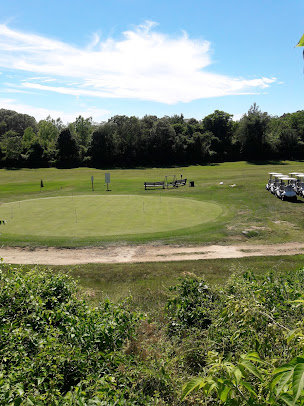 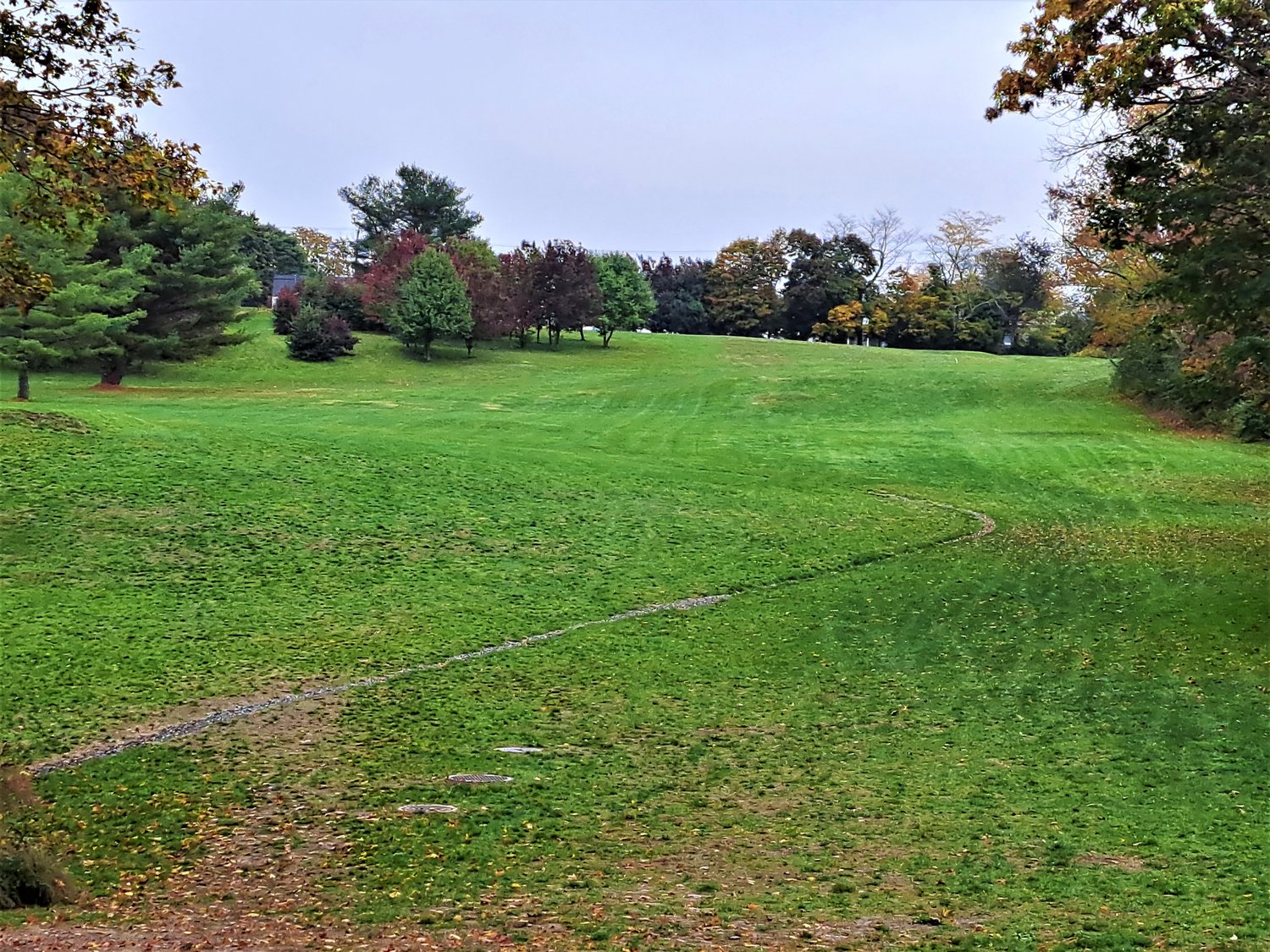 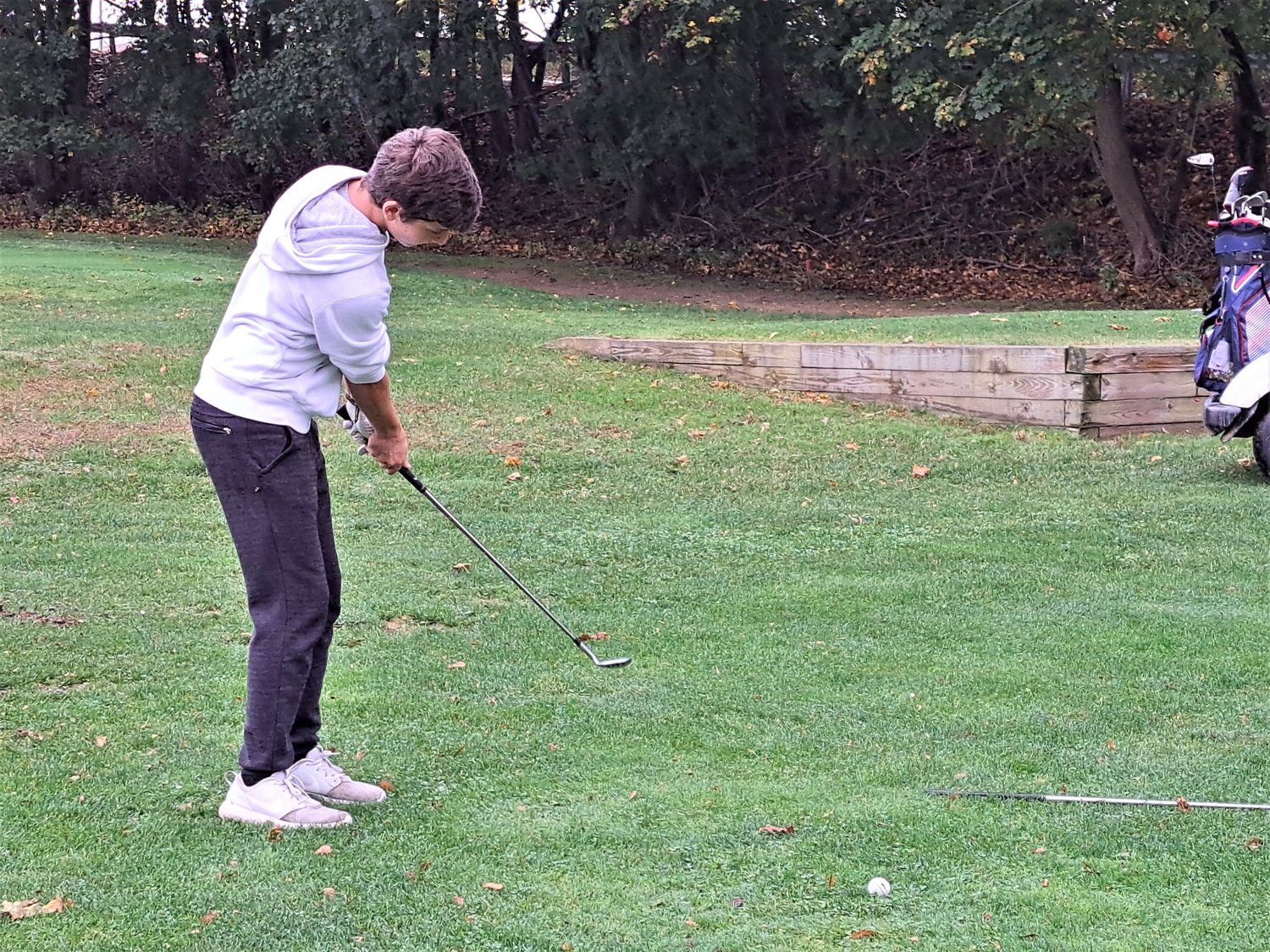 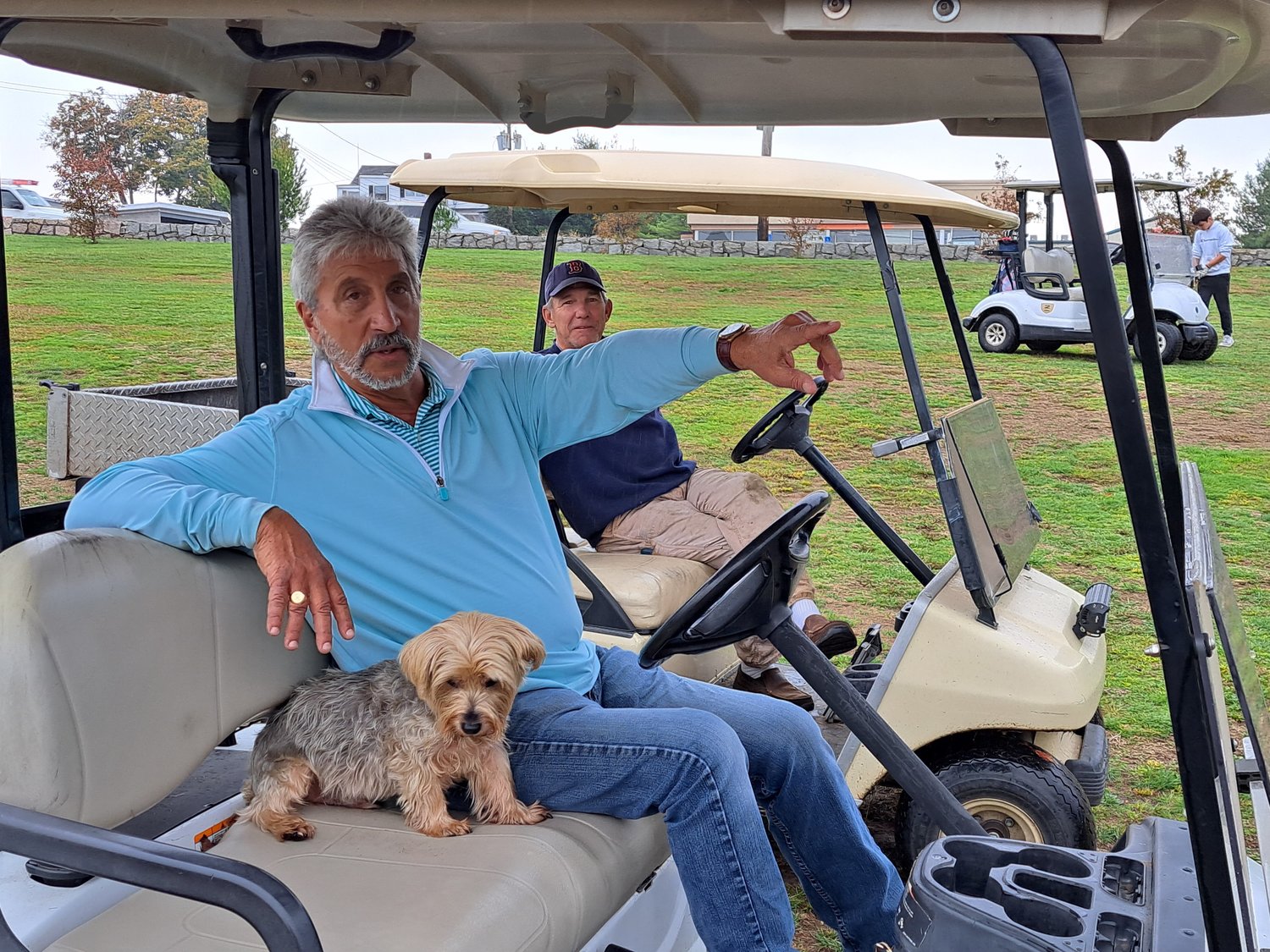 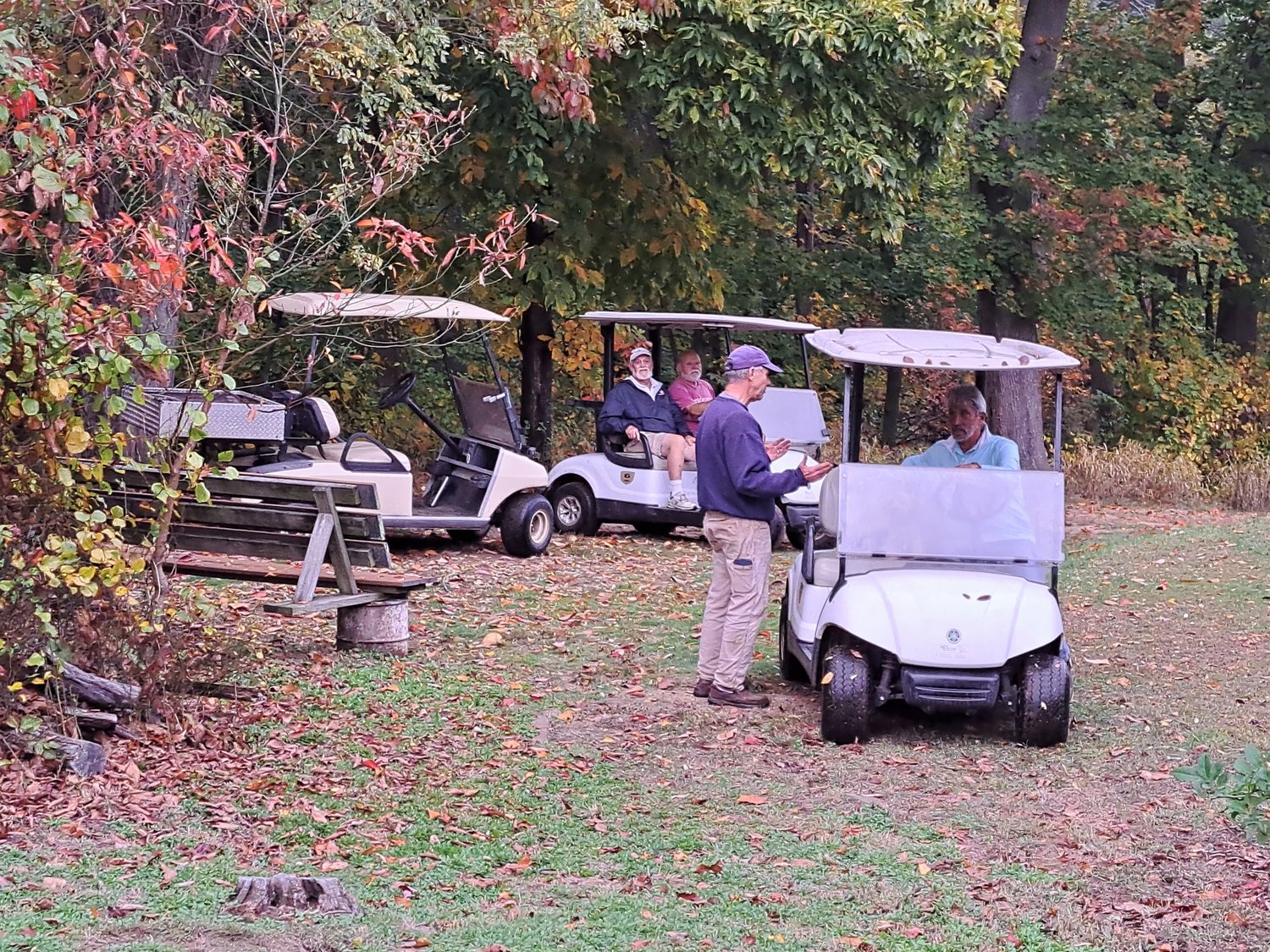 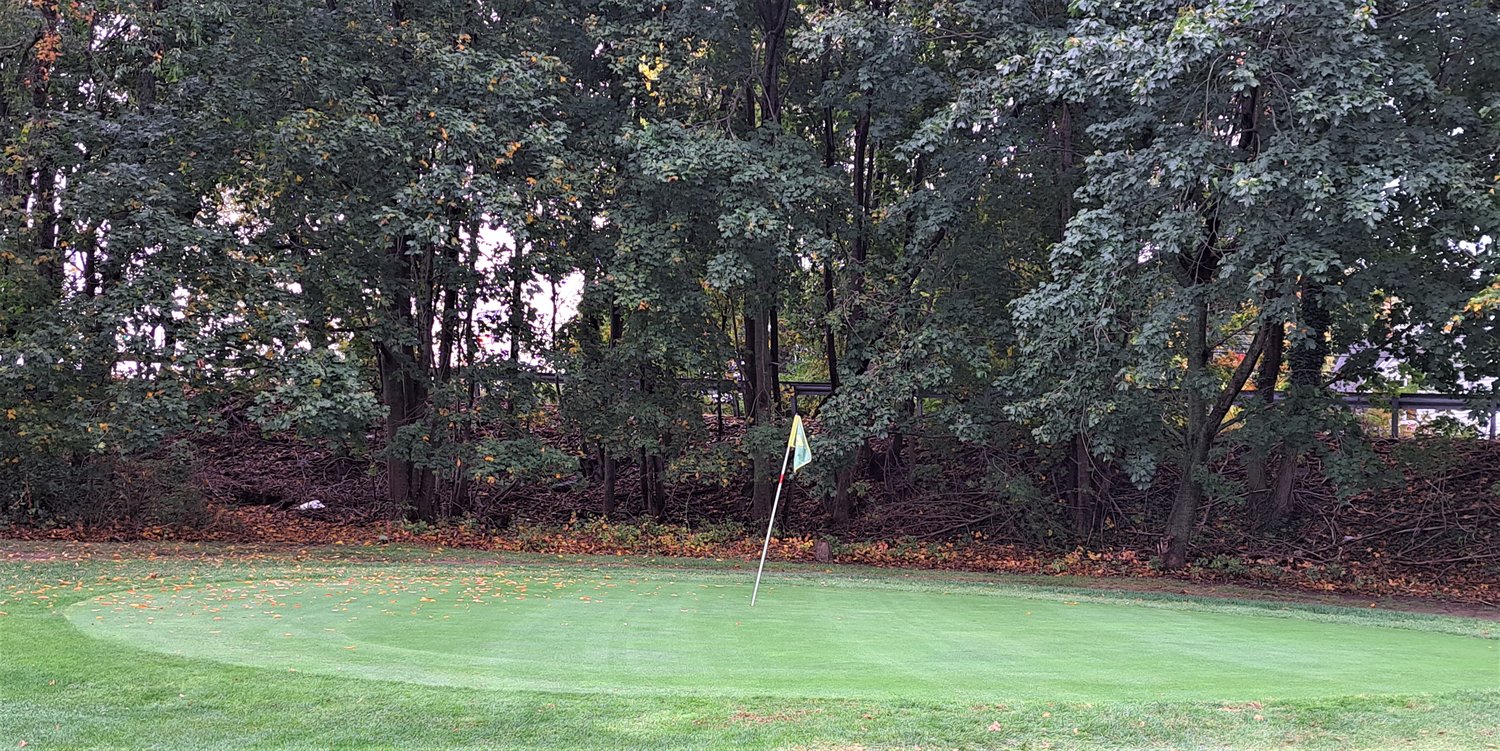 It may not be as majestic as the Wannamoisett, Agawam Hunt or the former Metacomet golf courses, but the 6-hole Silver Spring golf course on Pawtucket Avenue in East Providence is a little known gem for golfers.  The course which opened in 1919 had fallen on tough times.  Membership is down to about 80 members, down from a census of a few hundred.  There used to be long waiting lists to join but the recent downturn in golf club popularity and damage from COVID restrictions haven’t helped.  The privately owned Wannamoisett, Agawam Hunt and Metacomet all faced some level of financial difficulty.  Wannamoisett and Agawam Hunt rebounded enough to stay open, but Metacomet sold its property privately.

Late last month The Reporter toured the public-private Silver Spring course.  The paper met with club president Lou Roccabello and members Charlie Jordan, Jim Hibbert and Pete Taylor.  The small course is struggling to stay open and is hearing rumors of a possible sale or some “action” regarding the golf course.  The entire property is owned by the Mobil-Exxon corporation and is leased to the membership group for a nominal fee, if anything at all.  It’s an arrangement which may date back to the 1900’s.

“What happened over the last couple of years is that this course became unplayable.  The conditions kept people away, among other reasons,” said new club president Roccabello.  Roccabello grew up in East Providence and is a 1972 graduate of East Providence High School.  He now lives nearby in Barrington.  He is an expert on greens-keeping and has worked on numerous parks such as Colt State Park, Goddard Park and Fort Adams to name a few.  He is the past president of the Rhode Island Golf Course Superintendent’s Association and had refurbished Goddard Park for the state.  With numerous friends and some family in East Providence, he was asked if he could help with Silver Spring this past year.  “I said yes, and I came in with very limited equipment and resources to bring back the course.”  Bring it back is an understatement.  Roccabello accepts no payment of any kind and volunteers his time 7 days a week, three times a day.  The course president gave a golf cart tour of the expansive site.  “As you can see, we brought it back.  The play we’re now getting has been phenomenal.  The actual greens are as good as any more exclusive facility.  Our conditions here are spot on,” he said.  A ride to all of the greens and around the picturesque property reveals lush scenes not observed from Pawtucket Avenue.  Lou Roccabello got involved with Silver Spring 20 years ago when another member, his brother, the late Rocky Roccabello urged him to join.  “I live now near the RI Country Club in Barrington, and love golf, but I’m here every day, mused Roccabello.

“The membership is the best kept secret in the golf community,” chuckled member Charlie Jordan.  “It costs $400.00 a year for unlimited golf.  Any time, every day, members can golf, even holidays,” said Jordan.  “We have seen all kinds of excitement.  We have golfers hitting glow in the dark balls at night. We’re flexible for our size.  The 6-hole course can be played several ways.  "You can play either 6, 9, 12 or 18 holes of quality golf." The six-hole format can be played in approximately 1 hour. The 9-hole format in approximately 1 ½ hours. The 12-hole format in approximately 2 hours and the 18-hole format can be played in approximately 3 hours. "It is very creative; we are a 6 hole course with 18 distinct holes.  All holes are played from different teeing areas, therefore giving you the 18 distinctive holes. The same greens, but there are many different tee-off spots," Roccabello explained.  Roccabello and Jordan quickly pointed out that a professional athlete and other serious golfers enjoy the refurbished course.  “We have assistant superintendents from elsewhere coming here to play a lot.  People are very impressed and like our flexibility and friendliness,” said Roccabello.  The course is run mostly by volunteer members. A budget of about $50,000 covers salaries for groundskeepers and grass cutters and there is an expense for water and gas for tractors. "We keep things very reasonable for our members.”  Although the once unkempt golf course is now looking superb to many golfers, club members are not resting idle.  “We will never be complacent,” said Roccabello.  “There are always ways to improve.  If it was perfect, we’ll still find something that needs to be done.”

The course does have a small clubhouse but not at the level of more prestigious clubs.  It has a small gathering area and some supplies are stored.  A non-member can come play golf for 30 to 40 dollars and even rent or borrow a golf club and balls.  “Most times we don’t charge for the use of clubs and give away some used golf balls.  A garage stores sophisticated greens grooming machines that Roccabello and others use to manicure their course.  It becomes clear that Roccabello was the key to the club’s resurgence.  Since his arrival it didn’t take long for members to see a vast improvement in course conditions.  “We went right to work.  I brought in some URI turf guys I know to help start us off.  Equipment was broken down, everything was tired and finances were poor.  We made the club all inclusive, anyone can join, anyone can play.  There is no place that is this affordable.  Those on fixed incomes, veterans, senior citizens, are all able to afford golf at Silver Spring.”  The club often provides free beverages at times to members.  The club reaches out in many directions to keep up with the times.  Veterans are invited to play free golf on Veteran’s Day.

Non members can walk in and play golf for 30 to 40 dollars for an entire day.  Ten dollars will give you use of an electric golf cart, even though most members choose to walk.  The course offers more than physical golf.  It also forges a close friendship with members.  The recent passing of 89-year-old Joe Pangborn illustrates this point.  Pangborn was an active member of Silver Spring until his health declined.  “For a few months before Joe passed, he would come to the club and sit while greeting and watching members play golf,” said Charlie Jordan.  “We felt it really helped Joe enjoy his final days and we actually noticed an uptick in club revenue with people coming by to visit Joe.”

The club stretches out playing golf “until there is snow on the ground,” laughed the group.  Although many youngsters in the city flock to the course with sleds in hand when it does snow, the club kind of looks the other way.  In fact, many golfers play during a cold winter day, if the sun is out.  “So, if you really divide the $400 membership fee by the number of actual golfing days, it probably costs only a few dollars a day to play golf.  A bargain,” noted Pete Taylor. “If I wasn’t a member here, I wouldn’t be playing three days a week as I do now.”  All parties believe that the course is now top notch.  “I truly believe it is in the best condition that this course has ever been in,” added Jim Hibbert, club publicist.  “This is a great, affordable club for those who can’t otherwise pay for more expensive country clubs.  And we’re close to the same quality of golf.”

The current site where Silver Spring golf course exists has an interesting history. The land is bordered by Pawtucket Avenue at the top to the East and the East Bay Bike Path and the Providence River at the bottom of the site to the West. At one time this property was home to one of the city's majestic amusement parks. “Vanity Fair is the most ambitious, grandiose amusement park north of Coney Island,” shouted out ads for the new park opening in 1907. It had all the rides like its southern neighbor, Crescent Park. There was a Chute the Chute, roller coaster and carousel. It boasted a hotel, boardwalk, dinner hall, Wild West Show, dance hall, circus, an Indian congress, and wild animal area. Perhaps one of the most spectacular events ever was the "Fighting the Flames exhibit." Fighting the Flames was a mock city that every afternoon would have flames shoot from gas jets and actors would call for help. There would be an exciting rescue by fire fighters who had the actors jump into nets, arms of fire fighters, or were carried away to safety. The developers over extended themselves though as it also set itself apart by charging admission, having a planned midway, and an overall design scheme. The midway was surrounded by white buildings with lights outlining each structure. Vanity Fair was doomed to fail. It went into receivership in its first year. It struggled on for two years until 1910 when it went bankrupt.

By 1915, Standard Oil Company bought the land and created an oil tank farm on the water's edge. Silver Spring Golf Course was established in 1919 as a company golf course for the Standard Oil Company. Later Standard Oil sold out to Mobil Oil and the course was used for Mobil Oil executives.  On January 8th, 1963, Robert Salter leased the property from Mobil Oil and incorporated Silver Spring Golf Course. Later, a group of local men organized a corporation with the goal of providing an affordable golf course for "seniors, juniors and the local public." Today Silver Spring is public/private and is also open to the public. It has a Board of Directors and remains on land owned by Exxon/Mobil.

Club members have heard the rumblings of Exxon/Mobil wanting to sell off the property, but no one has been informed of any specific actions. “It would be very difficult to sell this land due to decades of oil, etc., which have passed through this land from tankers,” believe many club members.

The club wants to increase membership and to publicize the course more to those not familiar with it.  We want to increase public support and awareness.  “I was on a waiting list for 3 or 4 years before I could join,” said Jordan.  Not anymore.  “In the meantime, we invite people to visit and join while we have this membership room.  You can’t beat this deal if you like golf.  It may be the best deal in America.  Come check us out,” said President Lou Roccabello.  As the interview ended, Lou Roccabello and his faithful dog Boo, took their usual walk around the course.