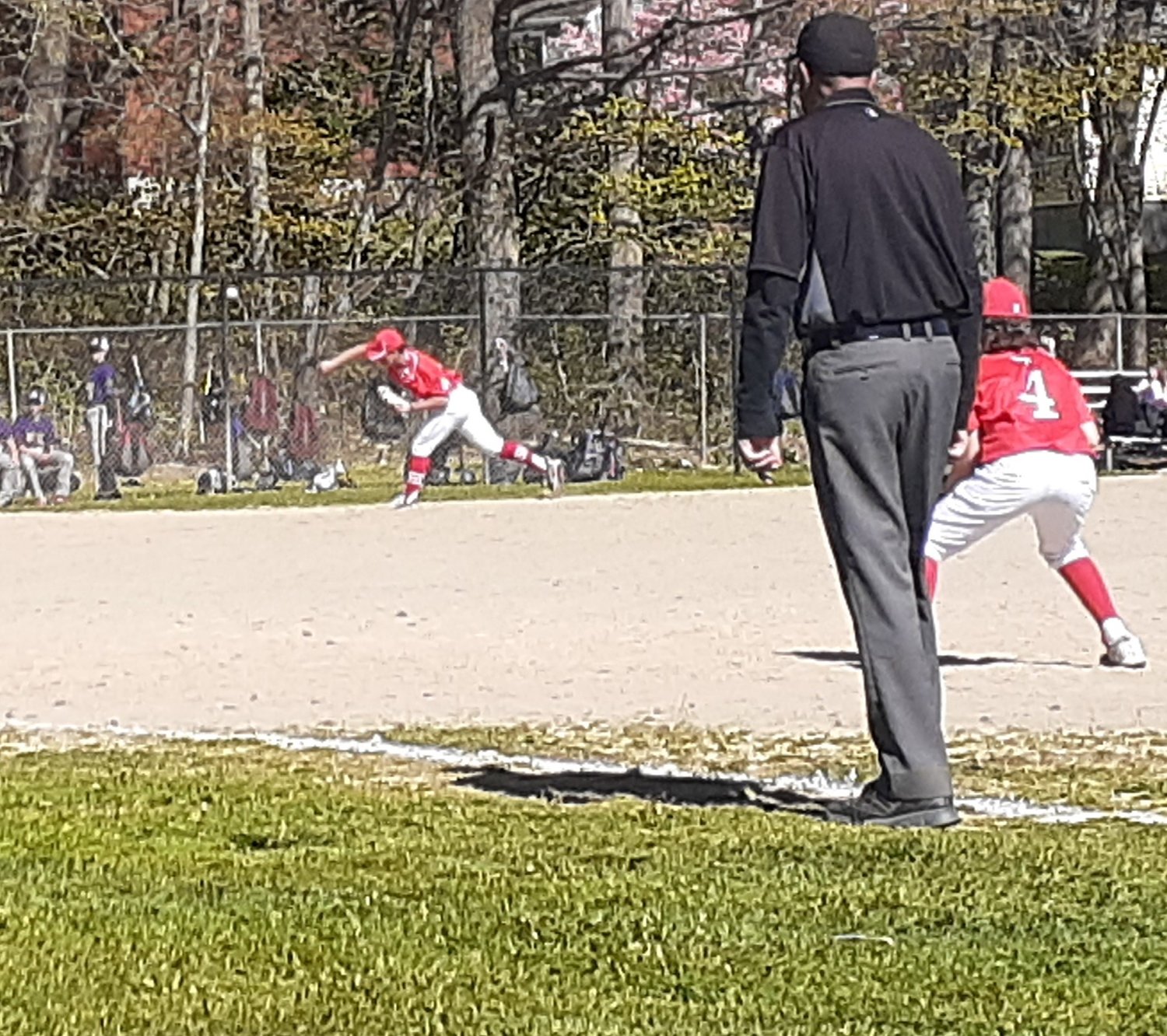 RMS had bases full of runners in mercy win over Birchwood on Tuesday in NP.
Bob Rodericks photo
Previous Next
Posted Wednesday, May 11, 2022 12:00 am
By Bob Rodericks

The Riverside Middle School baseball team continued their undefeated march toward a Rhode Island Middle School championship with an 11-0 mercy-rule drubbing of Birchwood MS in North Providence on Tuesday, May 10th. The win clinched the Eastern Division title for the Vikings. Aidan Martins for RMS led the way, pitching three shutout innings and adding two doubles at the plate. Nolan Lorenz, Gavin Palombo and Owen Richards each knocked in two RBI, as the team cruised to its 7th division victory.

The team will play its last regular season game against Our Lady of Mercy (OLM) on Friday at Glenlyon Field in Rumford at 4:30 pm. OLM can’t get to the game until late afternoon and RMS’ home field at the Riverside Recreation Field is too busy with several other athletic uses on Thursday. Accordingly, the game has been moved to Glenlyon Field which is on Kelley Avenue off Wilson Avenue in Rumford. The field is behind the Myron J. Francis elementary school.

“One more regular season game and then the playoffs,” said RMS head coach Matt LaRoche after the Birchwood victory. “Our job is to stay focused and not get overconfident at this point.” LaRoche is right to caution his team. As the state playoffs get underway, they may run into other undefeated teams. As of May 11th, N. Cumberland, Lincoln, Feinstein-Coventry and Narragansett all are unbeaten in their respective divisions. The state has four middle school divisions: Northern, Central, Eastern and Southern. Other teams to watch are Kickemuit (7-1), Hope Highlands and Western Hills (4-1), Cole (3-1), Curtis Corner (4-2), Wickford (3-1).

Teams with a higher seed will be the host/home team. If both teams have the same seed (semi-finals or finals), the division with the best winning percentage among their four playoff teams will be the host/home team. The first round of playoff games is scheduled to start May 19th or May 20th. The quarterfinals on May 24th and Semi Final on May 26th. The Championship game will be played at East Providence’s Pierce Memorial Field, tentatively scheduled for June 2nd.

The Reporter will update schedules, times and locations of the games as needed.