Alissa Musto will compete in the Miss America Pageant in September 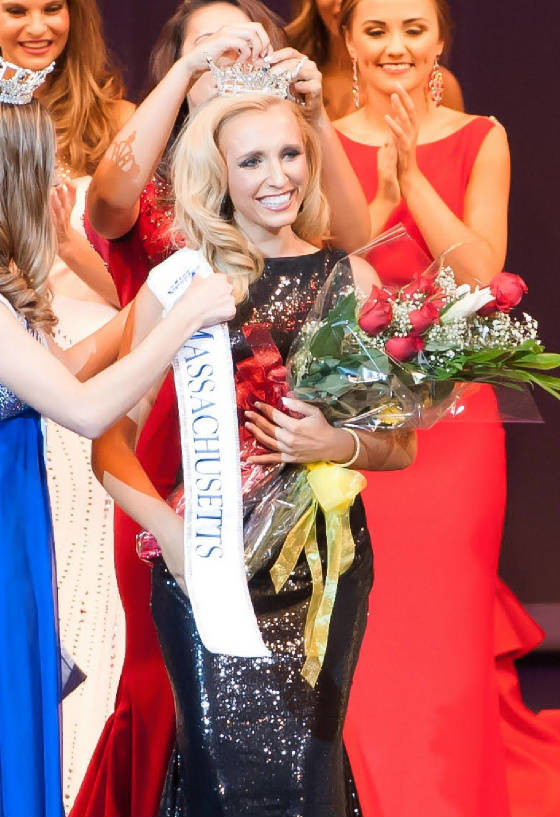 A young woman from Rehoboth was crowned Miss Massachusetts last month and will be competing in the Miss America pageant in September.  Alissa Musto, 21, won the title of Miss Massachusetts 2016 at the 77th annual Miss Massachusetts Scholarship Pageant on July 2 at the Hanover Theatre in Worcester. “I was excited. It was such a huge honor. When you hear your name called, your mind goes blank,” Musto said.

Alissa Musto competed as Miss Cambridge and played the piano for her talent competition. “I was shocked and very honored. There were so many beautiful girls there who have been at it a lot longer than I have,” Musto said. Musto was also in the Miss Massachusetts Pageant last year for the first time and won fourth runner up. Another young woman from the area, Meagan Fuller of Attleboro, won Miss Massachusetts last year and Fuller passed on the crown to Musto.
Musto, daughter of Billy and Janine Musto, graduated cum laude from Harvard University with a degree in government in May. She graduated in three years by taking college courses over the summer. She is also a graduate of Providence Country Day School.

She says being in a pageant wasn’t something she really saw herself doing. She heard about the pageant a few years ago while she was working at a music store and after doing some research, she decided to give it a try. “It was another way for me to promote my talent, which is piano, and it was a way to earn some scholarship money,” Musto said.

Music has been an important part of her life since she was a little girl. She has been playing the piano since she was 4 years old and currently works as a professional musician playing piano and singing at hotels, restaurants and events all over New England. “That’s my passion, my love, and one of the reasons I decided to compete,” Musto said.
As a teenager, she won a number of major talent competitions locally including “New England Performs” and “Rhode Island’s Got Talent” and was invited to perform at several well-known venues such as McCoy Stadium, The Hard Rock Cafe, and Foxwoods.

Musto was chosen as a top ten finalist out of 45,000 entries in the Kidz Star USA Talent Search. In early 2012, Alissa was selected as one of five young artists nationwide as part of the "Find Your Voice" competition. Music is also the focus of her platform in the pageant. She formed a non-profit organization, “Changing Keys: Connecting Kids with Keyboards,” a few years ago. “We collect unused pianos and bring them to at-risk schools and community centers such as the YMCA and Boys and Girls Clubs,” Musto said. “It gives kids the opportunity to participate in music education and learn an instrument,” she says. So far, a few dozen pianos have been distributed, most in the metro Boston area, but also to locations in Providence and soon in Fall River.

It all started when she was teaching piano at a school in Fall River. Some of her students didn’t have pianos at home to practice on. She helped connect individual students to keyboards so they could practice. “I felt there was a need for it and I could do it on a bigger scale,” Musto said. And “Changing Keys” was born. “I’m glad it has come to fruition and it’s able to make a difference,” Musto said. Musto will be bringing her platform and her music to the Miss America Pageant next month. The 96th annual Miss America Pageant airs on September 11 on ABC. “I can’t wait to get up there and perform my talent on the Miss America stage,” Musto said.

Anyone who would like to meet Miss Massachusetts, the Hillside Country Club is hosting a fundraiser and send-off for Alissa on August 19, 7-9:00 p.m. The event will support the Children’s Miracle Network/Boston Children’s Hospital, the national platform of Miss America. Then she has the national pageant in Atlantic City to look forward to. “I’d love to be the first Miss America from Massachusetts. That would be awesome,” Musto said.