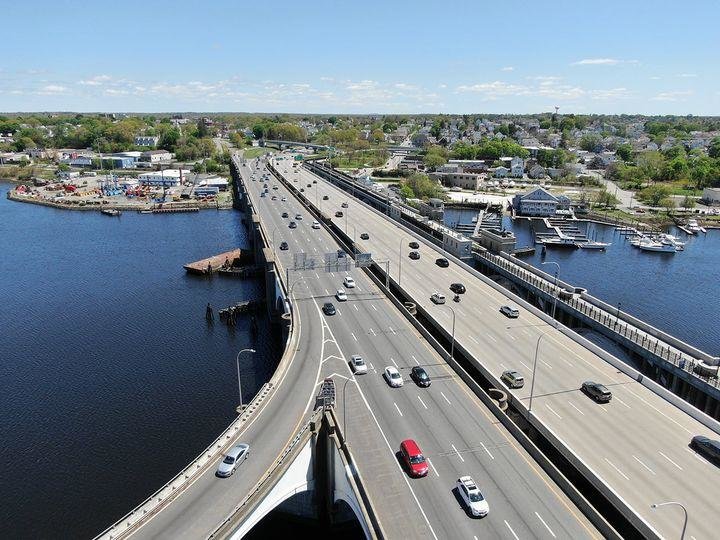 Council in Pump Station Agreement
The City Council authorized the Mayor to enter into the Pawtucket Avenue Pump Station Transfer Agreement in a long standing effort to provide East Providence with a backup supply of fresh water for residents.  The agreement is with the Bristol County Water Authority (BCWA).  The formal agreement states, in part, “in 1991 and 1993, the BCWA and the City entered into two memoranda of agreements which provided for the BCWA to construct a pumping station and transfer it to the City upon completion of construction.  It also states that the “pumping station was constructed in 1997 and is located on Pawtucket Avenue at the northeast corner of Silver Spring Golf Course on land owned by the Mobil Oil Corporation. The pumping station location is subject to an easement Agreement dated July 1, 1997, with Mobil Oil Corporation; and the City desires to assume ownership of the pumping station pursuant to the Pawtucket Avenue Pump Station Transfer Agreement…”

The City desires will assume ownership of the Pumping Station for one dollar ($1.00) and other good and valuable consideration, the payment and receipt of which are hereby acknowledged, and the BCWA and City agree as follows:  BCWA will seek to modify the Easement so that the City will be added as a grantee to the Easement.  Modifications to the Easement shall be approved by the City and final acceptance shall require approval of the East Providence City Council.  The facilities included in this transfer agreement include the Pumping Station and all equipment included therein, including the generator, the electrical service and panel, and site appurtenances.  Upon approval of this Agreement, the City shall assume ownership, operation, repair and maintenance responsibility of the Pumping Station, generator, electrical service and panel, and site appurtenances, including the fence, grass, pavement, etc.  However BCWA shall maintain ownership, operation, repair and maintenance responsibility for its main pipelines and valves, meter vault, and meter bypass line connected to the Pumping Station which are within the Easement.

The resolution sponsored by council members Bob Rodericks and Nathan Cahoon seeks to start the process to provide East Providence with an emergency water connection which currently doesn’t exist.  “This is pretty straight forward stuff.  We have put a great deal of money into repairs to make it functional and have been working on this for most of the eleven years that I’ve been here,” water superintendent Jim Marvel told the council.  “It’s a pretty good deal for a buck,” said Marvel.  “The second part of this deals with a joint venture to construct the emergency Pawtucket pipeline.  This would give us a true second source of water.  As it stands today, we’re still tied to the Providence supply line.  By going to this second source of supply with Pawtucket, there is no chance that we will be without water.,” urged Marvel.  “It’s been our biggest weakness over the years, what happens if we lose the Providence supply.  The answer is, you’re out of water.  There are steps to take to modify this, we’re not committed to a blank check.  The exposure to the city right now is about $800,000.”

Rodericks asked Marvel about recent news “which allows for the use of federal monies for water systems infrastructure work.  Would this apply here?”  Marvel said that “it could, that’s certainly up to the administration and you folks.  We have prepared for this and in the meantime, we can pay cash for this,” added Marvel.  “Let me just say this,” added Rodericks.  “Nothing affects people worse, than turning on your water faucet and there is no water.  We have an old infrastructure with a main supply pipe coming under the Providence River.  Some pipes are 100 years old.  In my opinion this is a no-brainer,” said Rodericks.

“When we first learned of this project, we heard of the one supply line under the river that connects to East Providence and another further south in Riverside and it feeds Bristol County.  Phase one connection to Kent Heights is about done which provides BCWA with an emergency line, totally at their expense.  Phase two which gives us an emergency line to Pawtucket will be a shared expense.”  Superintendent Marvel verified this process.  “And as we try to check on the condition of existing pipes, they could be damaged and we now have no emergency connection,” noted Cahoon.

“Even though we have monies saved for this from water rates, why would we use that instead of these federal monies,” asked Councilman Mourato.  “From my understanding, it can’t be any more clearer that the infrastructure funds could be used for this,” added Mourato.  To which DPW director Dan Borges replied, “there are still some restrictions as to how that money (federal) can be spent regards to engineering versus construction.”  Cahoon suggested pursuing the federal funds retroactively once the limitations are known.  “If the federal funds are used incorrectly, they can be taken back, 100%,” said project consultant Alan Fung, who urged caution.  “The final rules on these infrastructure funds may not be in until well into January.  Many cities and towns are waiting for the final guidelines,” added Fung.

“What is the timeline here, everything we do is a rush,” asked Mourato.  Councilwoman Anna Sousa also asked to include the possibility of federal infrastructure funding.  “I’m not so sure this has been rushed,” said Rodericks.  “Superintendent Marvel has been working on this for eleven years.  A lot of people have been talking about the water infrastructure of the city since the sixties.  Let’s get this thing going and we can use these federal funds when they become available and if we’re eligible.  I certainly agree with infrastructure federal funding, if eligible, I brought it up. I don’t want to hold up on starting this project.”

“From my sense, everything we know about that (supply) pipe is it could leak at any time.  I’m inclined to put this through now and talk about a reimbursement later,” said Cahoon.  The council agreed that the resolution to begin the project should move ahead and seek the use of infrastructure funds if and when they are available and the city eligible.

As part of the planning process, the City is soliciting public input regarding the reduction of the City's vulnerability to natural hazards. These include flooding, severe thunderstorms, major winter storms, hurricanes, excessive heat, coastal erosion, sea level rise, and more. Residents can learn more and provide input on hazard mitigation planning goals and risk-reduction ideas for East Providence.

"We encourage our residents to join us to learn more and to provide input on hazard mitigation planning goals and risk-reduction ideas for East Providence," DaSilva added.  The 2017 Hazard Mitigation Plan is available for review and inspection in the Department of Planning, Room 309, City Hall, 145 Taunton Ave., East Providence, RI (M-F 8 a.m. to 4 p.m.), and is also posted on the city's website eastprovidenceri.gov/departments/emergency-management.

Resident Candy Seel spoke at the meeting, calling the Mayor’s request for input in this regard “the definition of irony.  Keep Metacomet Green has been talking for a year and a half about the dangers of climate change and these issues.  Unfortunately, the Mayor has paid us no heed and in fact, the majority of this council chose not to listen either,” said Seel.

City to receive up $376,000 to provide Wi-Fi access to residents
The City of East Providence will receive up to $376,000 to provide Wi-Fi access to the community, Gov. Dan McKee announced last month.  East Providence is one of many communities in Rhode Island who will receive support to fund internet access for low- and moderate-income households, helping to bridge the digital divide.

The City of East Providence is seeking to leverage planned municipal infrastructure improvements such as new LED streetlights to provide open access Wi-Fi in targeted Census tracts, largely overlapping with the City’s designated Opportunity Zone. This project will also support digital literacy trainings in partnership with East Providence Housing Authority, the East Providence Library, EBCAP, the Boys and Girls Club, and the senior center as well as device access for households through the East Providence School District.

“It is important to our administration that all segments of our community have access to Wi-Fi,”

Mayor Bob DaSilva. “This initial project places us on the right path to providing Internet access to all members of our community.”

Working with our Community Development Director David Bachrach, the city has identified low- to moderate-income residential areas that could benefit from the connectivity.

In Rhode Island, 49,573 families or 12.2 percent of households, are not connected to the internet and another 34,936 families or 8.6 percent only have access via a smartphone and data plan, making nearly a quarter of Rhode Islanders under-connected, according to the 2019 US Census’s American Community Survey.

“Our Administration is committed to boosting internet connection throughout the state,” said Governor Dan McKee. “These awards will help Rhode Islanders better access reliable and affordable high-speed internet and the valuable resources it provides. This funding will complement additional awards and investments that will be made in this area in the near future, and I thank President Biden and our federal delegation for their continued support of this important funding.”

Recent City Board Appointments
The Mayor’s office requested and received confirmation of the following appointments:

The Rhode Island Department of Transportation (RIDOT) is reminding motorists that the first phase of traffic changes for the $78 million Washington Bridge project in East Providence and Providence has begun.  This will create travel time delays for I-195 West traffic and for those entering I-195 West using the on-ramp from Taunton Avenue, Veterans Memorial Parkway and Warren Avenue. All lanes on I-195 West will be narrowed and shifted to the right from the Broadway interchange in East Providence to the South Main Street exit in Providence. RIDOT also will reduce the number of lanes from two to one at the Taunton Avenue/Veterans Memorial Parkway/Warren Avenue on-ramp, requiring drivers to merge into a single lane prior to entering the highway.

The traffic changes are expected to lengthen the commute for I-195 westbound travelers, expanding the time when peak congestion begins and ends. RIDOT encourages drivers to plan extra time for travel, consider alternate routes, or shift travel to outside the busiest periods, which will be between 8-10 a.m. and 3-7 p.m.

The lane shifts will change over the course of the next four years of the project, but RIDOT will always maintain four through lanes for I-195 West traffic over the Washington Bridge. The project will finish in summer 2026. Additional information can be found at www.ridot.net/WashingtonBridge.

The westbound bridge carries more than 96,000 vehicles per day. It is one of the busiest sections of Interstate highway in Rhode Island. All construction projects are subject to changes in schedule and scope depending on needs, circumstances, findings, and weather. The Washington Bridge North Project is made possible by RhodeWorks, RIDOT's ongoing commitment to repair structurally deficient bridges and bring Rhode Island's transportation infrastructure into a state of good repair, promote economic development, and create jobs. Learn more at www.ridot.net/RhodeWorks.

DPW releases chip-a-tree recycling program
The Department of Public Works will be collecting and chipping Christmas trees for use as mulch for City projects. Residents have the option of dropping off trees or curbside collection.

Christmas tree drop off dates and locations through January 22, 2022: