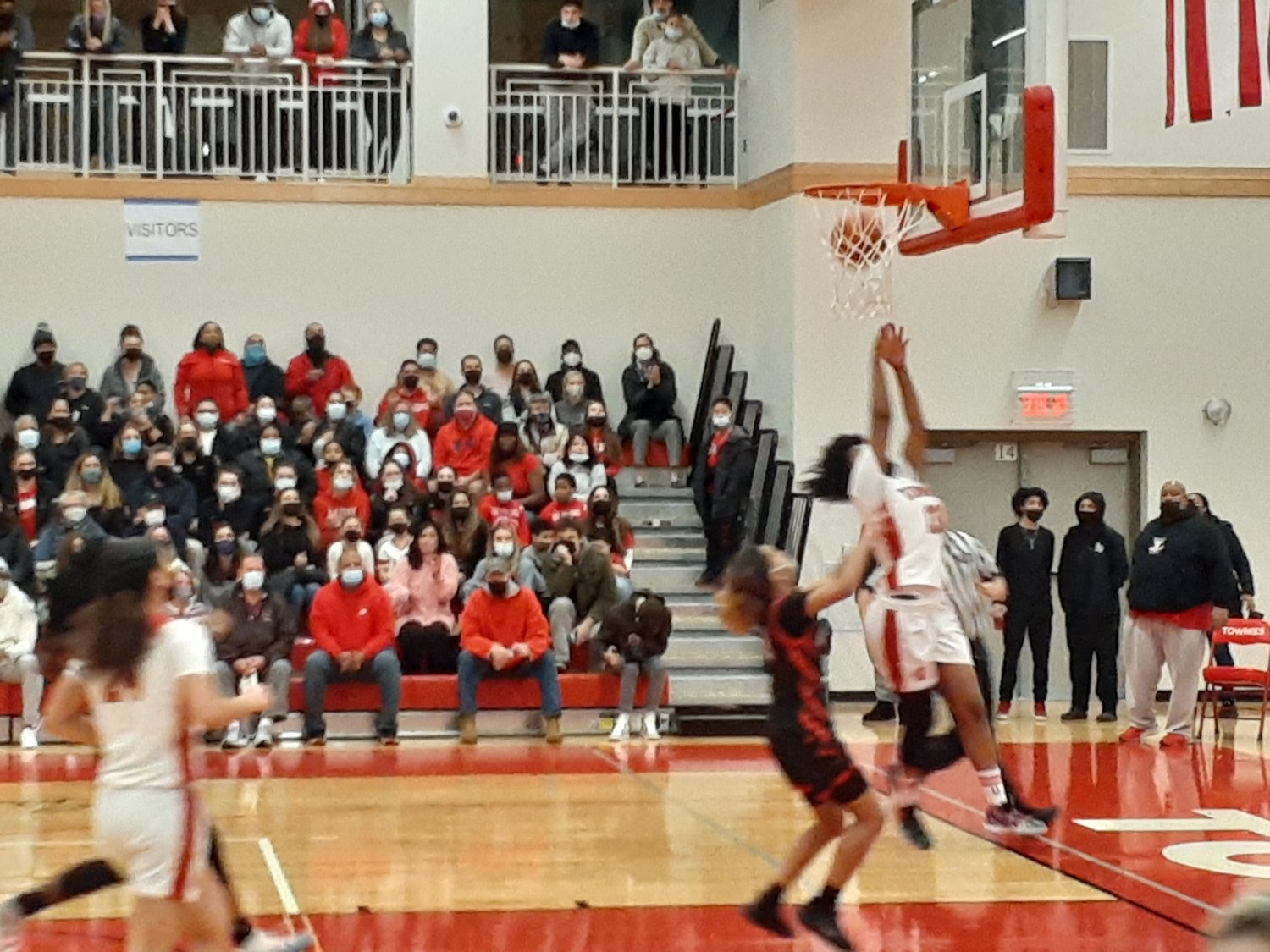 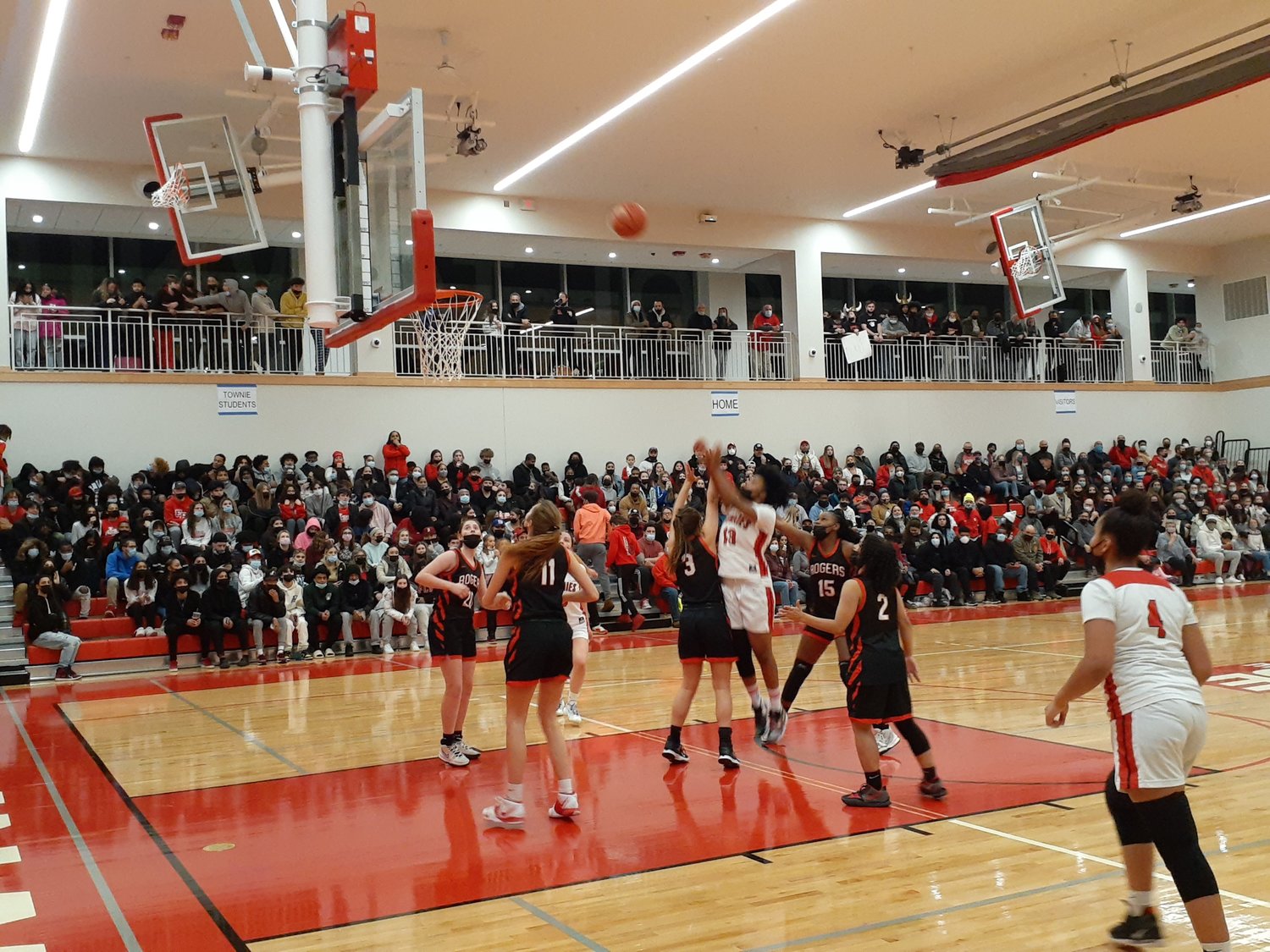 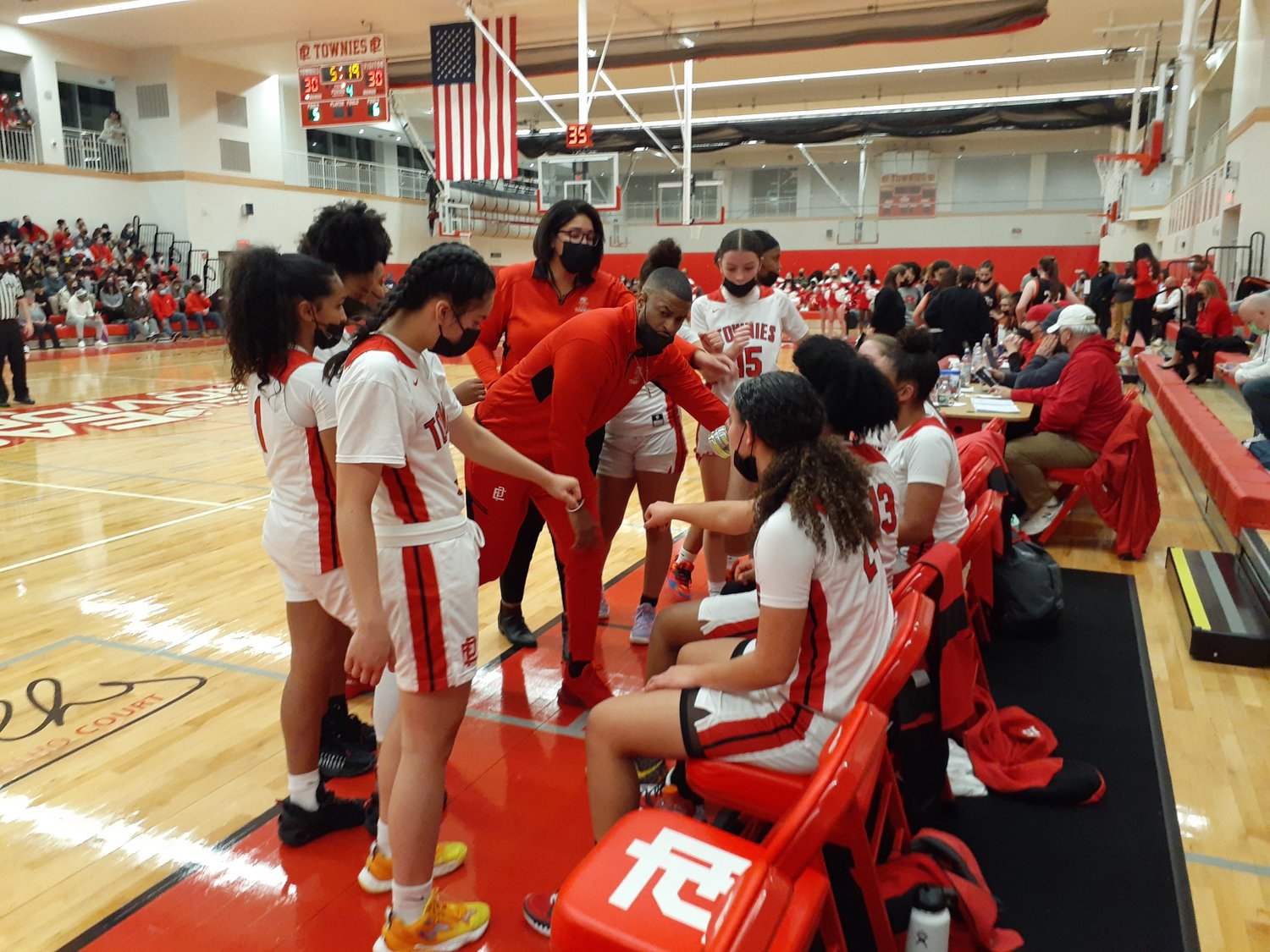 Coach Lambert and team in a timeout.
Bob Rodericks photo 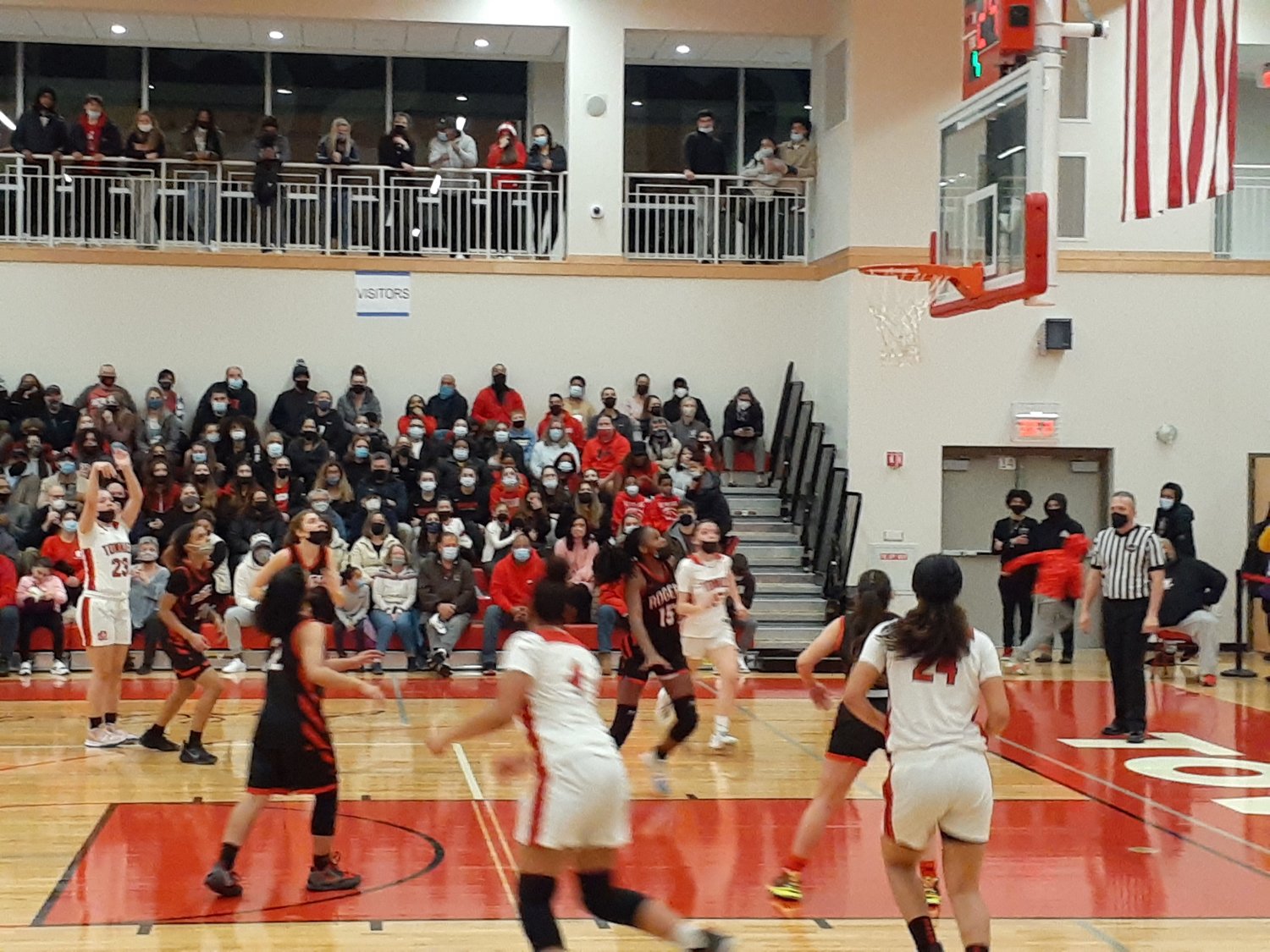 With the Townies up by two, Coach Lambert urges the crowd to support his players during a timeout.
Bob Rodericks photo 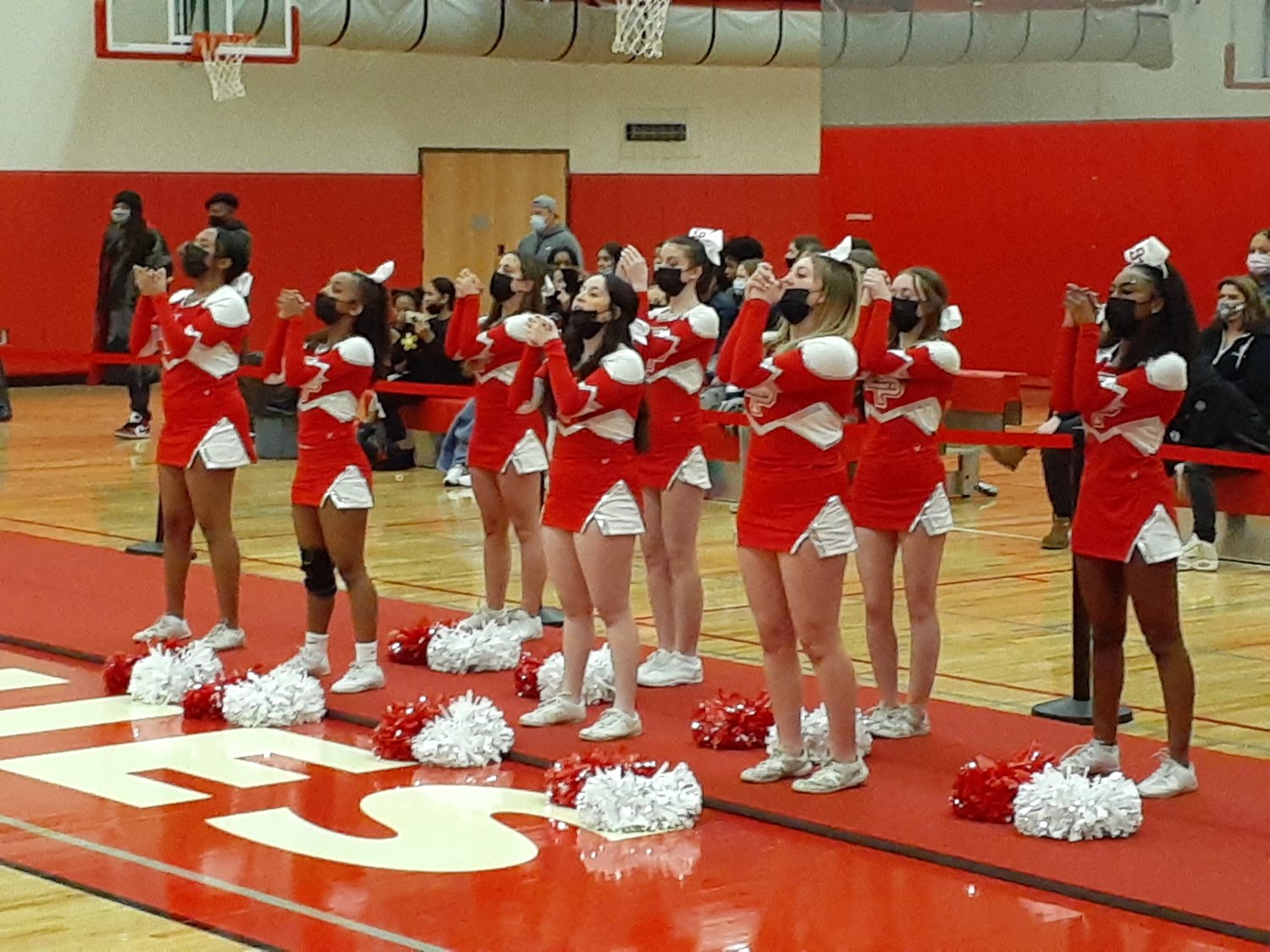 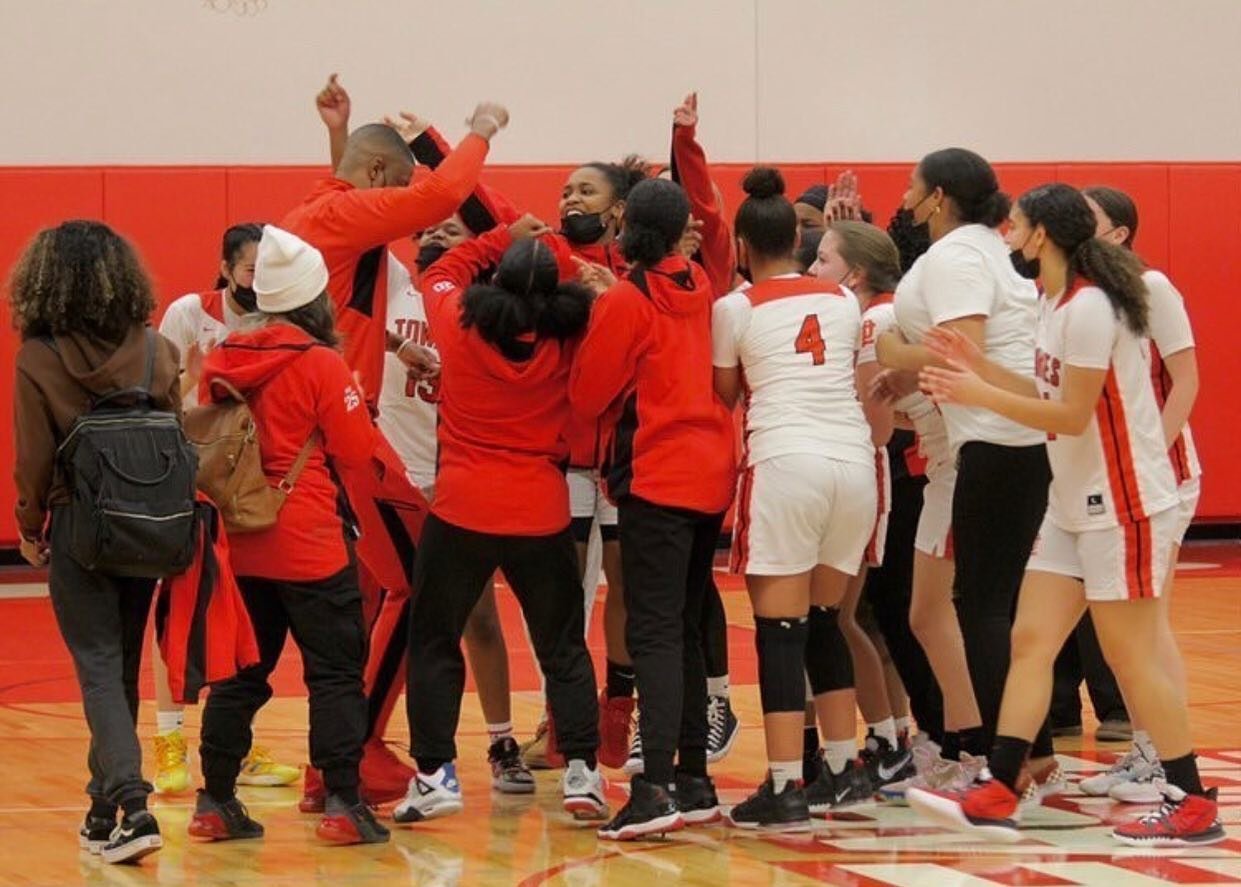 Together!
Previous Next
Posted Wednesday, February 9, 2022 10:00 am
By Bob Rodericks

It was billed as a potential shootout between two Division II girls undefeated basketball teams. East Providence and Rogers were each averaging about 57 points per game and had identical 13-0 records leading into Tuesday, February 9th at East Providence. The Townies came away with a 46-37 win to remain undefeated. The game was the first this season under relaxed fan attendance guidelines due to Covid. While there was no limit on fan attendance, masks were required.

The Townies came out a bit flat and trailed the Vikings of Rogers in the early going. Usually reliable players missed some easy shots and there were a few too many errant passes. Rogers employed a tenacious full court press to slow the Townies offense. “It was nerves, all nerves,” said the Townies energetic and animated coach, Bay Lambert after the game. “For the first time the girls played before a crowd. It was standing room only. Even the second-floor track overhead was used to allow fans in the gym. We start three freshmen, but they exceeded expectations in that first half and came from behind to tie the game at half,” continued Lambert. Indeed the Townies got behind by 6 or 7 points but a tenacious defense and some timely offense tied the score at the half before a frenzied crowd.

“Defensively we made some young mistakes and offensively we did too, but the grit and resilience and the energy that this team possesses is absolutely out of this atmosphere. This team loves each other on and off the court,” added the coach. Energy is also one of many adjectives ascribed to coach Lambert. In just his third season as head coach, he has led his team from hardly winning to sitting on top of Division II yet to lose a game. He may be the loudest cheerleader in the gym. When his team is down he shows a calming but firm coaching style and when the players respond and look good, Lambert often explodes in applause and screams and points to the crowd (just parents and faculty could attend prior to Feb. 8th) urging them to get loud. The crowd was raucous and supportive, on their feet a lot on Tuesday.

“This game could have gone either way. That team there (Rogers) is a good team. They are all juniors and a senior. We knew that we would have to fight their experience all night. But we also knew that in our house we would have to impose our will and keep making them run and be more athletic. Rogers has our utmost respect. They are very good and we will see them again as playoffs are coming up. But good teams win and I’m so proud of my players for pulling this off tonight. They persevered and wanted this win,” said Lambert. “What a great game for everyone.”

Lambert said that he really didn’t make any great adjustments at halftime. “It was all about fundamentals. Protect the ball, stop giving them rebounds and easy shots and to start guarding the players without the ball. We began to deny, deny, deny. We also put them in foul trouble in the second half which was a key because we have a deeper bench,” added Lambert.

In 2nd half action, East Providence steadily took control. Key defensive plays leading to a few fast break layups and three-point baskets by Breena Hannon (2) and Mya Lambert (1) were key to the Townie comeback. The Townie defense caused trouble for Rogers and stopped several Viking attempts at fast breaks. Rogers got into foul trouble and the Townies built upon a modest lead finishing with the 46-37 win. Makiah Denson led EP with 14 points, Mya Lambert had 13 while Breena Hannon added 11 and Kayla Hannon chipped in with 6. Arianna Ingram tossed in 2 points for the Townies 46-point total. Maeve Crowley had 14 and Sydney Newsome 13 to lead the Vikings scoring. While fans may not have seen some of the prolific scoring that these Townies have been known for, they may have seen how a good team overcomes some early game adversity and doesn’t give up until the final buzzer.

The Townies play next at Mt. Pleasant on Thursday at 6 pm and away at Prout on Saturday at 7 pm. EP finishes the regular season against Smithfield on ‘senior night’ Monday, February 14th at home at 6:30 pm. State playoffs begin on February 21st. Should the Townies achieve the top seeding, they will host both playoff games at EPHS.