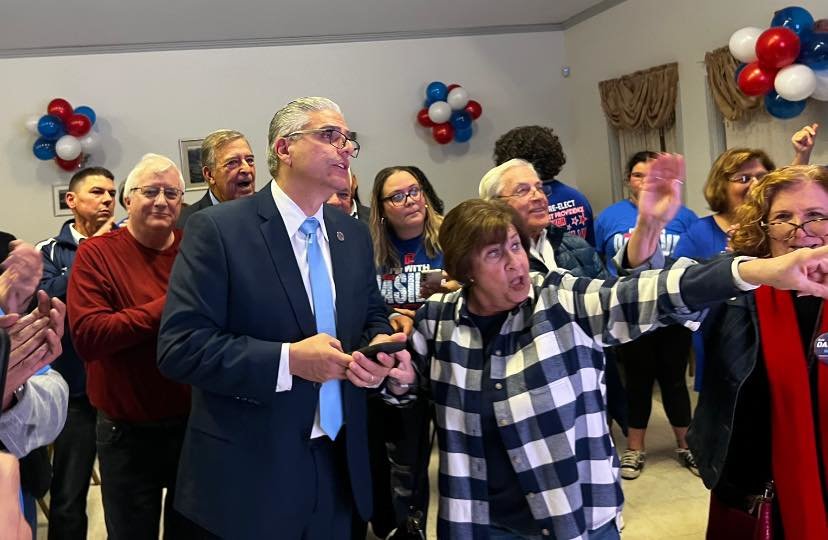 East Providence’s first-ever Mayor, Roberto “Bob” DaSilva easily won re-election over challenger John Rossi with just over 60% of the vote. DaSilva received 9131 votes to Rossi’s 5921. After the election the DaSilva campaign committee celebrated at a packed Santa Maria Hall on Broadway. “I want to thank our residents for this support,” DaSilva told a large crowd of supporters. “This is affirmation that voters like the direction our city is going in and want us to continue. I sincerely appreciate the support,” added DaSilva. “I will reach out to those who did not support me and see how we can meet somewhere in the middle on issues.”

Incumbent City Councilman-at-large, Bob Rodericks was re-elected over “People’s Party Candidate” Brian Castro. Rodericks had 7632 votes to Castro’s 5754. “I am pleased with the great support I received across the city and look forward to continuing the many improvements East Providence has seen during the past four years,” said Rodericks.

Castro wished Rodericks well. “If I wasn’t running, I would support you,” Castro told Rodericks. “I’ve always thought you were a good guy,” he said.

Also re-elected was incumbent Ward Two councilor Anna Sousa who received 1771 votes to 536 votes for Dunia Teresa D. Jesus Rego Samayoa. Samayoa was not seen much, if at all, on the campaign trail. Sousa is finishing her 6th year on the council.

The soon to be vacated Ward One seat, due to Robert Britto successfully pursuing the District 18 State Senate seat, was won by Frank Rego in a landslide win over Edward Wencis. Rego received over 70% of the vote with 2751 votes to 1131 for Wencis. Rego touted his lifetime Ward One residency and family roots as helpful to his victory. “I had a strong grass roots campaign, went door to door and utilized social media to get my message out,” said Rego.

Two incumbent city councilors lost their re-election bids. Ward Three councilor Nate Cahoon lost a close race to newcomer Frank Fogarty. Fogarty received 1734 votes to 1584 for Cahoon. The result was seen as an upset for Cahoon who had previously served on the School Committee and as a co-chair of the new high school building committee and was considered a major contributor to the success of the new school. “Thank you to the residents of Ward 3 for eight amazing years,” Cahoon said after the results were known.

“I want to thank the residents of Ward 3 for coming out and voting for me,” said Fogarty in a statement after the election. “I promise to work hard for you.”

In the Ward Four council race, incumbent Ricardo Mourato lost his re-election bid to newcomer Rick Lawson. Lawson received 2285 votes to Mourato’s 1971 count. Mourato became a critic of Mayor DaSilva during most of his council tenure. Lawson has been chairman of the city arts commission and is a member of the waterfront commission among other civic groups. “I worked hard with face-to-face campaigning door to door. This helped me greatly,” said Lawson.

In a post after the election, Mourato said: Congratulations to all the candidates that won last night, including my opponent. “Thank you, the residents of Ward 4, for the opportunity to serve you the last four years. Also, thanks to all who supported and believed in me,” he added.

The biggest upset of the local election may have been the ouster of long-time school committee member Charles Tsonos. Tsonos lost to newcomer Ryan Queenan who received 2070 votes to Tsonos’ 1722. Tsonos had aligned himself with several members of the self-described “People’s Party.” “I am so appreciative of the great support within Rumford,” said Queenan, a father of three daughters. “Let’s maintain and improve our quality of education where we can,” he added.

On the state level, five term State Representative Gregg Amore opted to leave the local scene and seek statewide office as the new Secretary of State. Democrat Amore won handily as he defeated Republican Pat Cortellessa by a 11,153 to 4,440 vote. Amore campaigned hard across the state and was rewarded with a big win. Amore is currently the Athletic Director for East Providence schools and a long-time teacher and coach. He will be leaving his school post to assume the duties of Secretary of State. “Thank you Rhode Island! I am honored to be your next Secretary of State,” said Amore, the former Social Studies teacher.