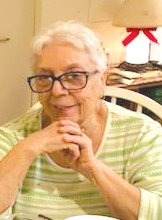 Mary Lopes-Cummings, 89, passed away on September 21, 2021 at home in Columbia, MD surrounded by loved ones.  Mary was born in Rehoboth, MA and was the daughter of the late Joseph Medeiros and Maria (Barboza) Medeiros and sister of the late Raymond P. Medeiros of Swansea, MA. She was married to Antone (Tony) Lopes, Jr (1923-1984) in Bristol, Rhode Island in 1950.  In 1971 they moved to Seekonk and raised their son until Tony’s passing in 1984. Mary later married Everett M. Cummings, or Uncle Red as he was lovingly referred to, in Swansea, Massachusetts in 1992 and they remained together until he died in 2006.

In 2012 she moved to Bowie, Maryland to be closer to her son and his family. Soon after she met her partner, Russell Lusby. They lived happily together for eight years, sharing meals at restaurants and shopping trips.  Russell passed away earlier this year.

Mary started her career working on the family farm in Rehoboth and then the factories in Massachusetts and Rhode Island. She later changed careers in the mid-1970s and served proudly as a school cook in the Seekonk, MA school system until her retirement in 1994. Cooking continued to be her favorite passion throughout her life and hosting parties especially at holidays brought her much happiness.

People were drawn to her openness, and she would listen with all her heart. Her kind and loving spirit was evident to everyone who met her.  She was accepting of others, with no judgement and built bridges within families and amongst strangers. Her family was the most beloved part of her life. She was proud of her son and his family and she had an unbreakable bond with her granddaughter Toni. In addition, her two grandsons brought much joy into her life and she cherished watching them grow.

She will be greatly missed by her life-long friends, former neighbors and family. She is survived by Her son, David Lopes and his wife Meagan of Maryland as well as her 3 grandchildren.

A graveside service will be held in North Burial Ground, Bristol Rhode Island on November 6th, at 11am.

In lieu of flowers, donations in Mary’s memory may be made to the Humane Rescue Alliance at www.humanerescuealliance.org