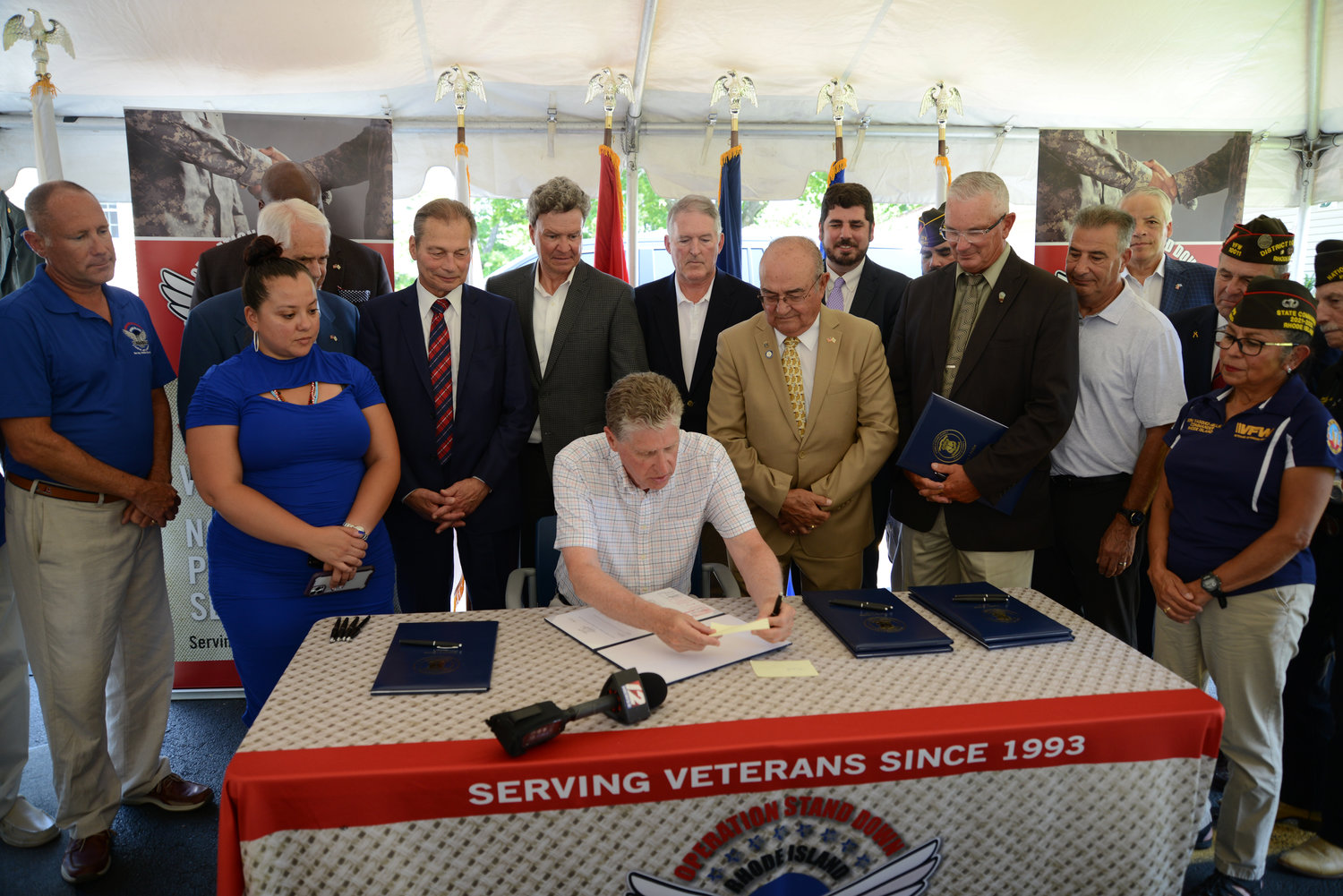 “Today is a great day because Rhode Island will finally join the majority of the states in giving veterans much-deserved tax relief on their military pensions. This is the fair and right thing to do in order to recognize and show our appreciation for the brave men and women who dedicated their lives to fighting for our safety and freedom. I thank Speaker Shekarchi and Governor McKee for supporting these worthy veteran initiatives, but most importantly, I thank our veterans. I thank them for their bravery, selflessness and dedication to ensure that all of us are able to stand here today in a country that represents freedom and democracy,” said Rep. Samuel A. Azzinaro, Chairman of the House Veterans’ Affairs Committee (D-Dist. 37, Westerly).

“Our military retirees have sacrificed so much for our country and I believe it is not only fair, but, also our moral obligation to honor their service by keeping their pension dollars in their pockets where it belongs. I am thankful that this year we finally acknowledged the brave and selfless service of our retired military men and women by allowing them to keep the benefits they so rightfully earned and deserved by serving our country and preserving our freedom. Thanks to our veterans, we live in the best country in the world and I am happy that their service is being recognized and appreciated today” said Sen. Walter S. Felag, Chairman of the Senate Special Legislation & Veterans’ Affairs Committee (D-Dist. 10, Warren, Bristol, Tiverton).

“As I travel the state, talking with Veterans, active duty, guard and reservists, and military families is always a highpoint,” said Governor McKee. “Veterans want to continue to make the Ocean State their home and remain a part of the communities and places that matter to them. Now, when military retirees look at where they want to move after service, Rhode Island will be at the top of that list.”

“As a first-generation American, I’m keenly aware that the life my family and I have enjoyed is only possible through the sacrifices of our veterans,” said Lt. Governor Sabina Matos. “The bills we are signing into law today will help Rhode Island repay the tremendous debt we owe those who have served our country. I am grateful to our colleagues in government for their support, and I look forward to continuing to use my role as Lieutenant Governor to support Rhode Island's active service members, our veterans, and their families.”

“Ending taxation of military service pensions is not only the right thing to in recognition of the many Rhode Islanders who fought courageously for our freedom, but it’s also an investment in our state’s workforce,” said Office of Veterans Services Director Kasim Yarn. “This change will allow us to retain top-tier talent which can drive Rhode Island’s economy forward. Military retirees bring a wealth of knowledge and backgrounds, benefitting Rhode Island in innumerable ways.”

The approved state budget exempts military service pensions from taxation beginning with tax year 2023. The Governor recommended phasing this out over the next five years in 20 percent increments, however, the General Assembly decided to completely eliminate the tax on military pensions in the upcoming tax year.

The legislation would make it a crime to fraudulently represent oneself as an active or veteran member of the military or armed forces for the purpose of obtaining money, property or other tangible benefits. The crime would be a misdemeanor punishable by imprisonment of not more than a year, or a fine of $1,000, or both.

The act was introduced due to the recent case of a North Kingstown VFW commander who was found to have used falsified military records in order to portray herself as a veteran when in fact she had never served in the military. The individual collected thousands of dollars from non-profits through her deception.

The act would waive the adoption fee to adopt a dog or cat from a public animal shelter for a veteran who presents a current and valid driver’s license or identification card with the word “veteran” printed on its face.

Representatives Vella-Wilkinson, Azzinaro and McLaughlin, and Senator Seveney, are veterans of military service.