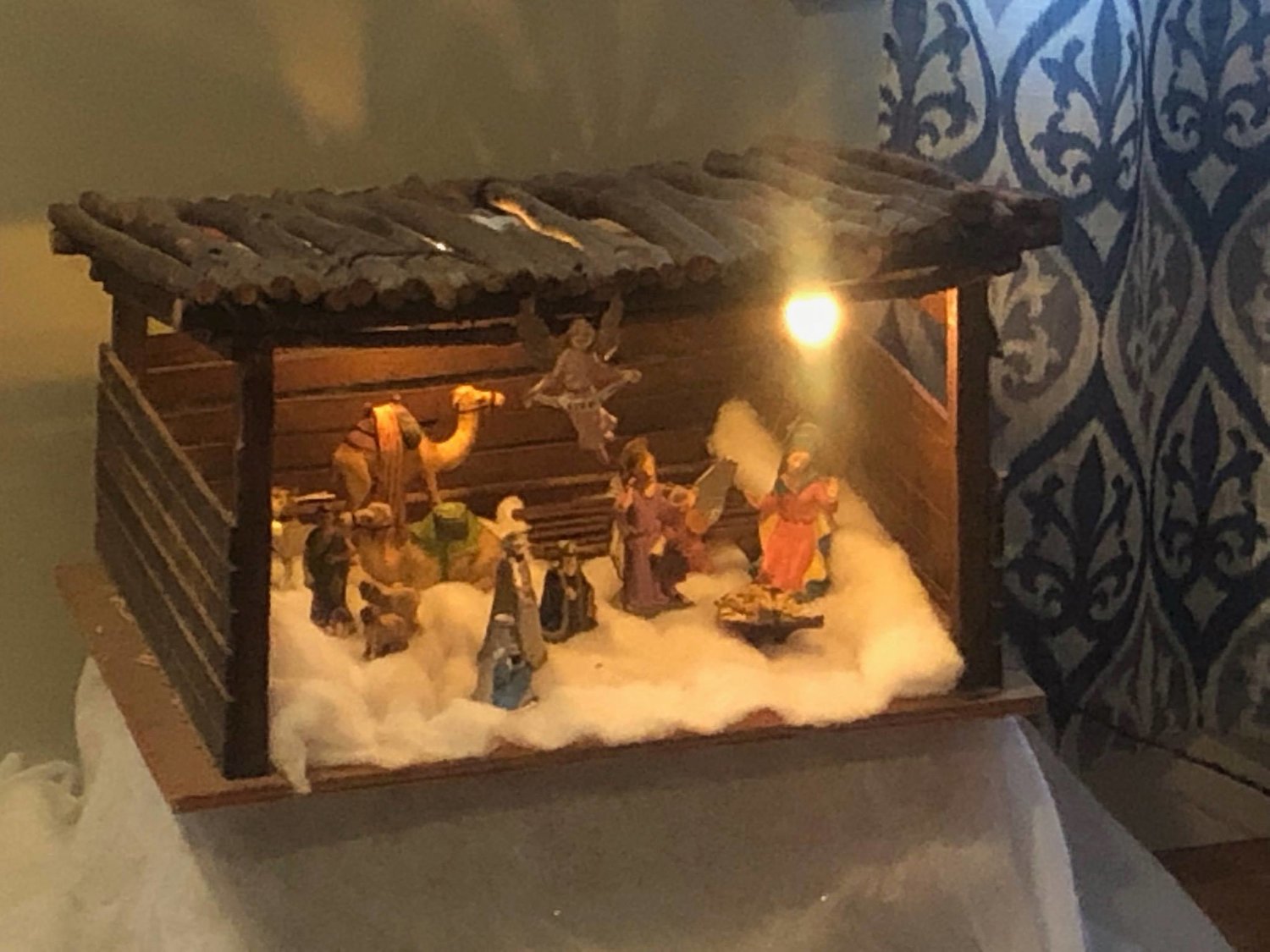 My Dad's manger made for Mom in 1950. Still with the family. 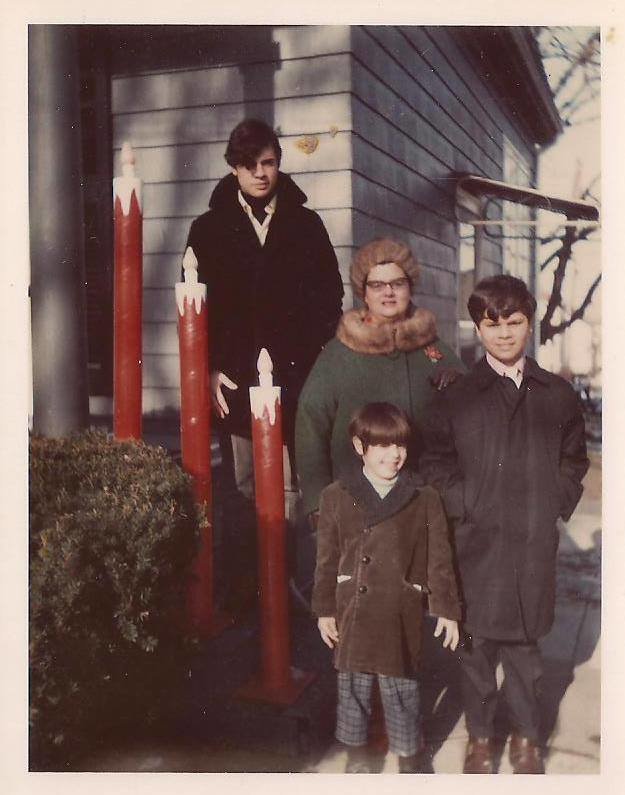 Heading out in 1968 to buy our Christmas tree at Farmer s Market. Dad on the camera. 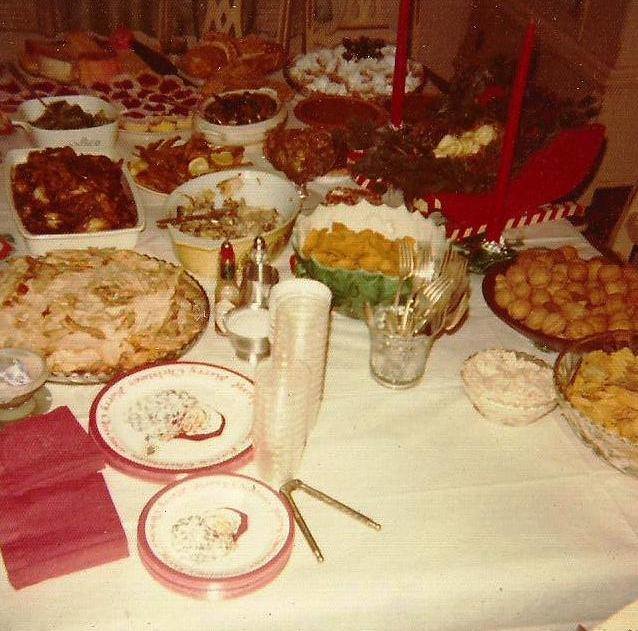 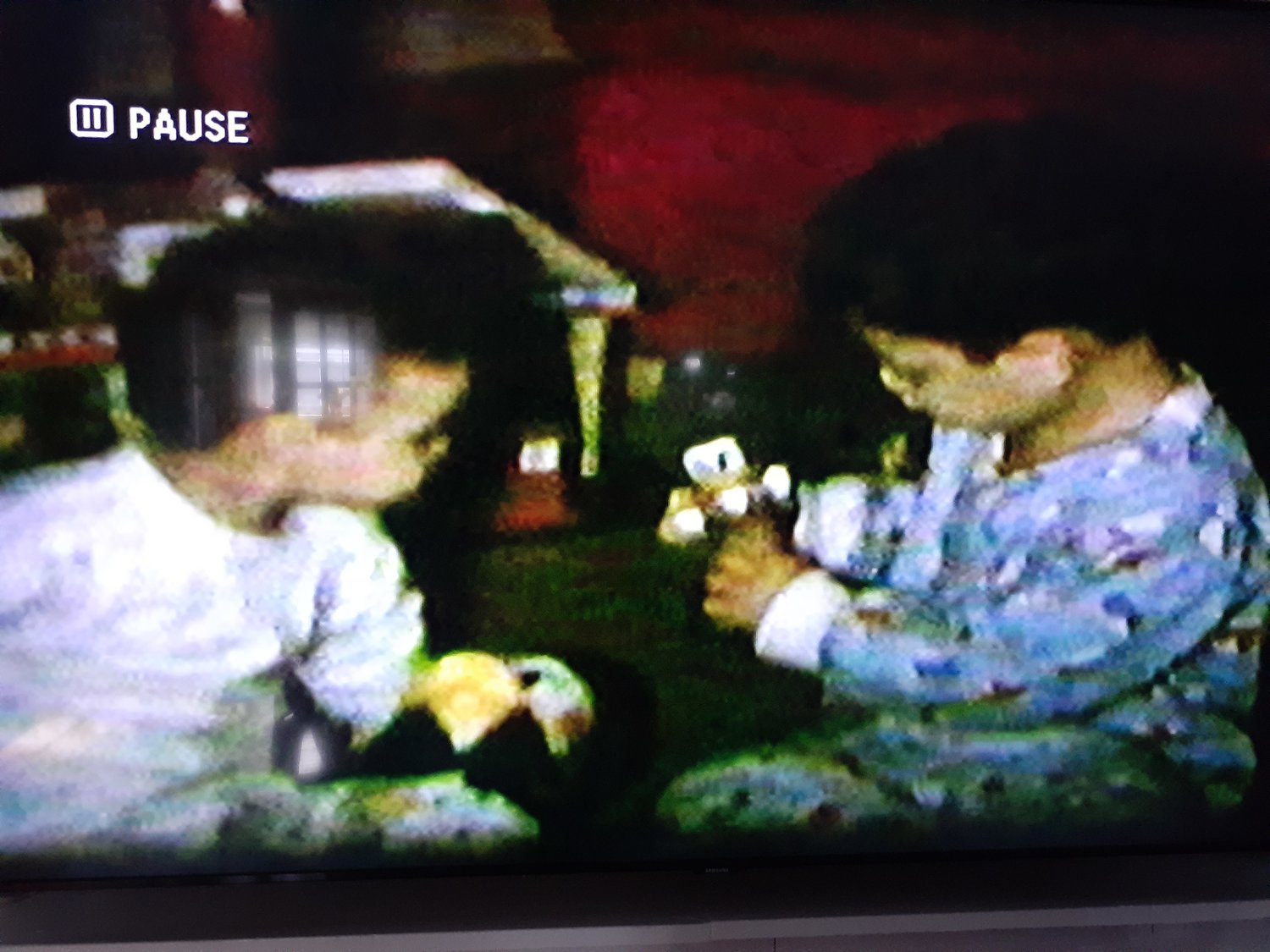 My brother Joey and me 1959 Christmas in Arizona 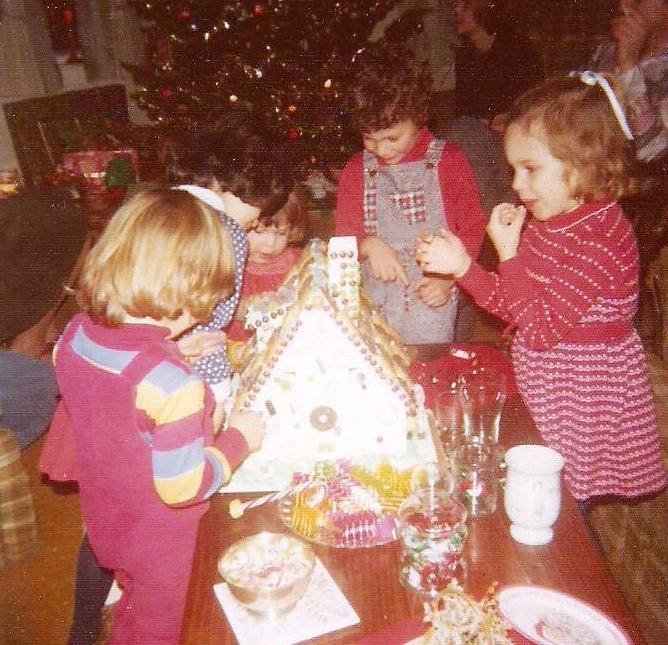 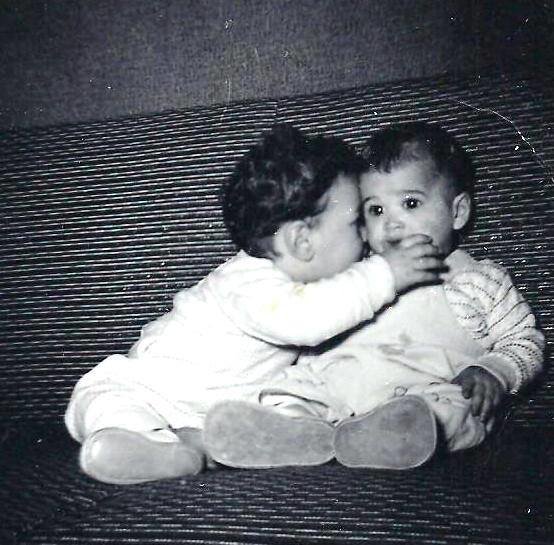 Telling my cousin Tony that Santa is coming. 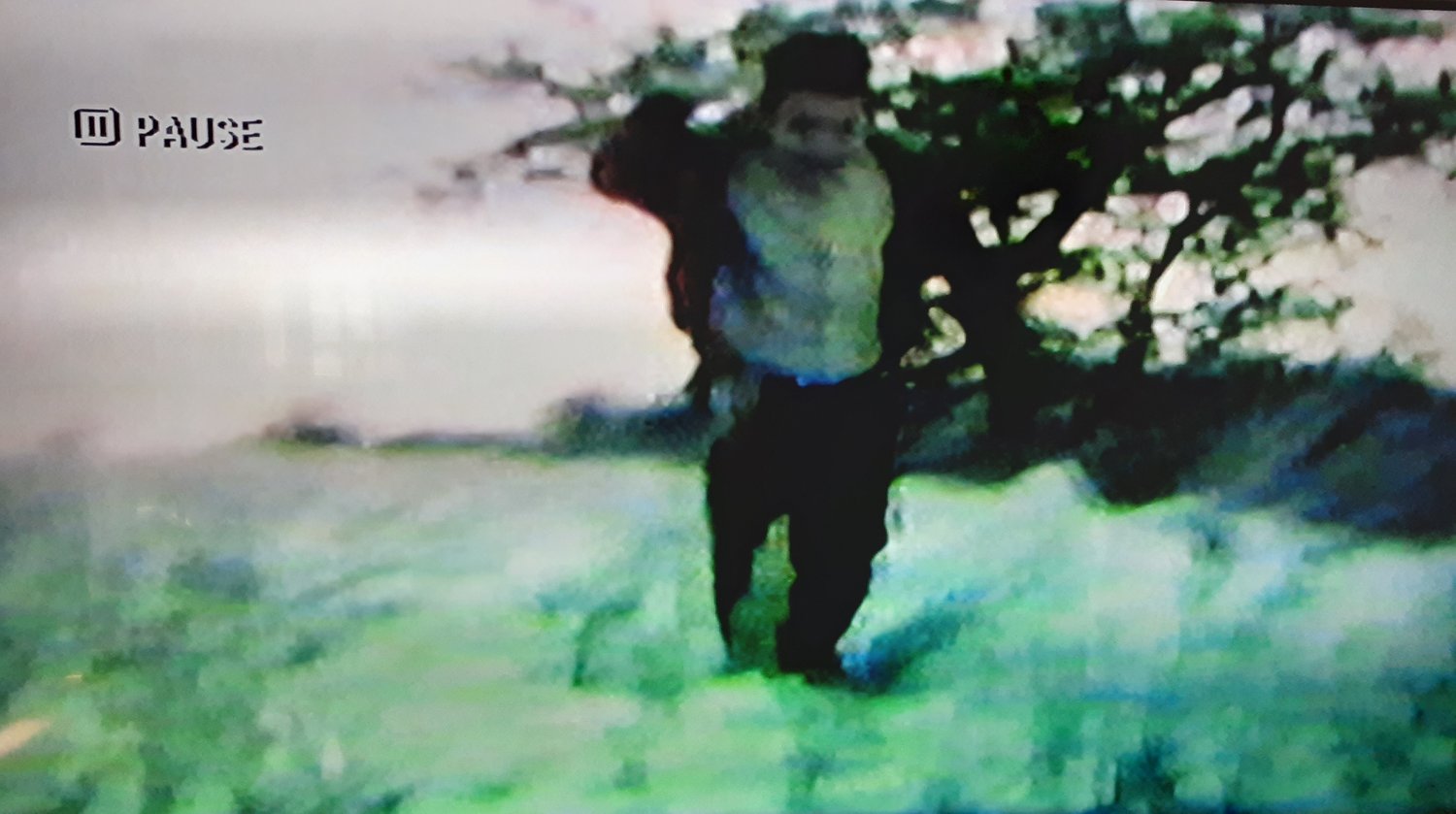 My parents found some Christmas snow for us in 1959 Arizona. 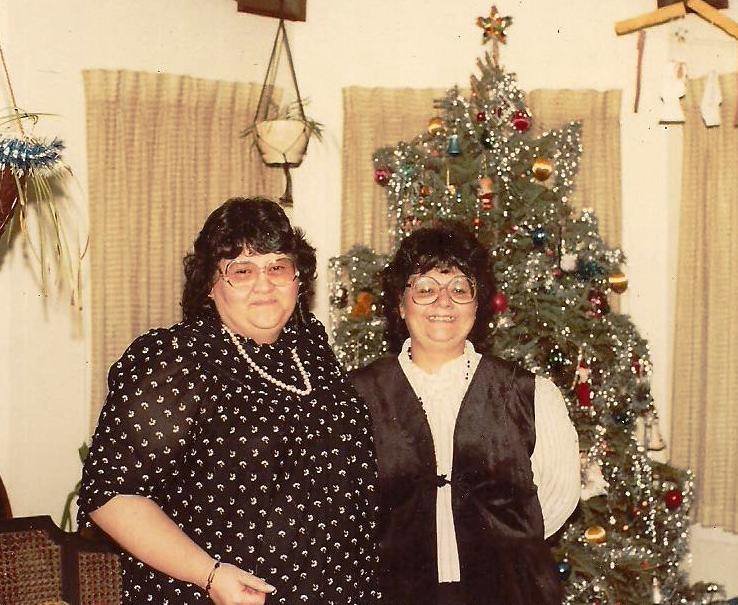 My Aunt Connie (left) and Mom in front of one of her trees. 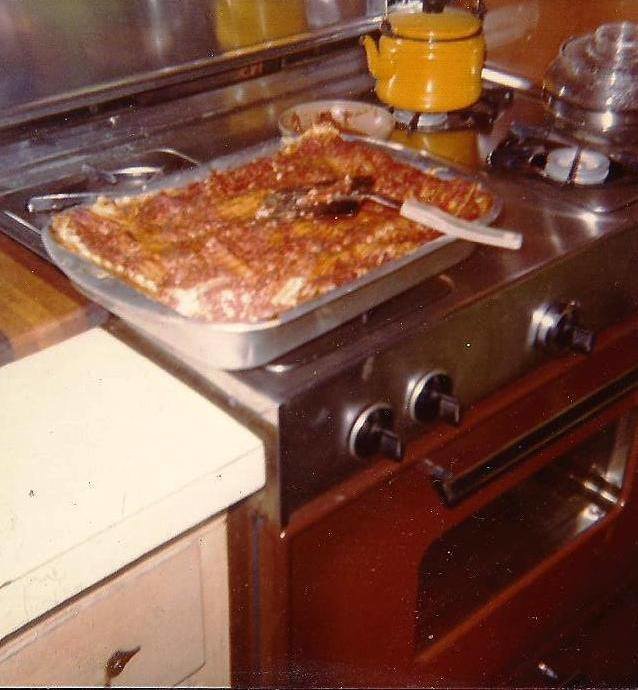 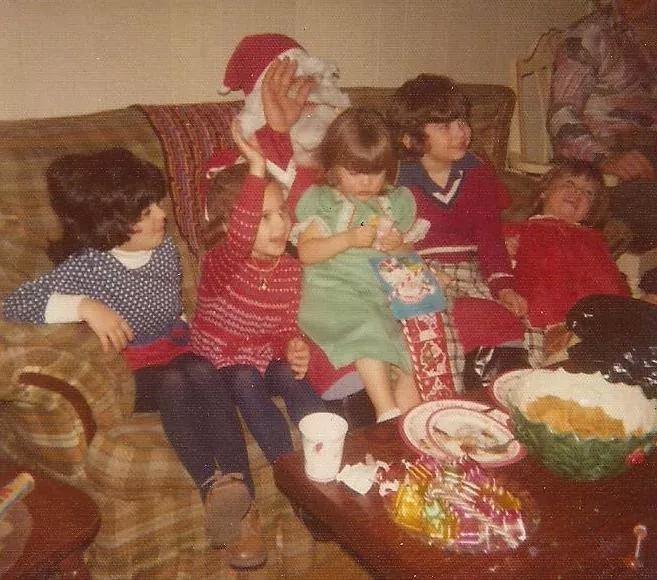 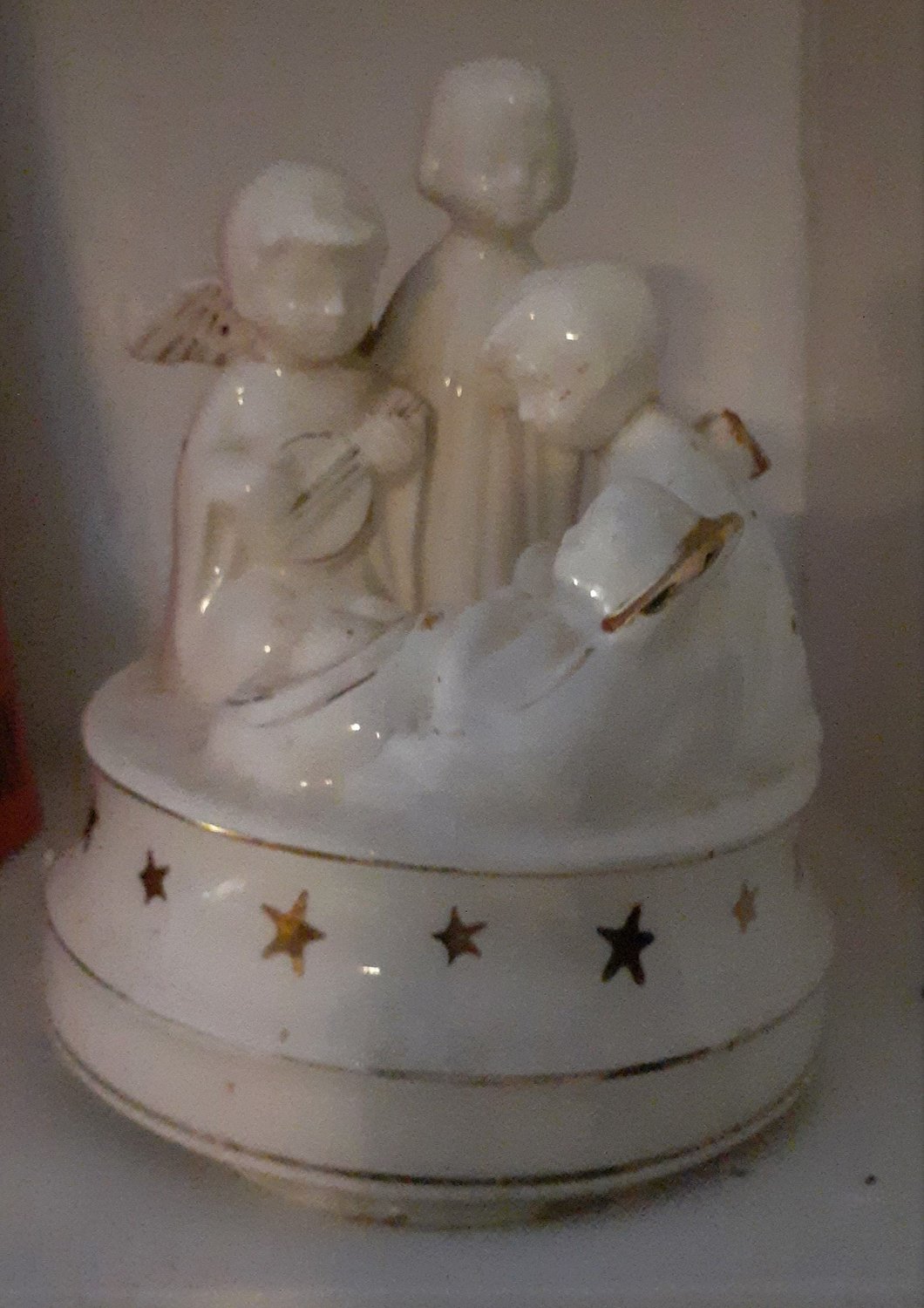 One of the many music boxes my dad gave to mom. It has a broken wing but still plays Silent Night. 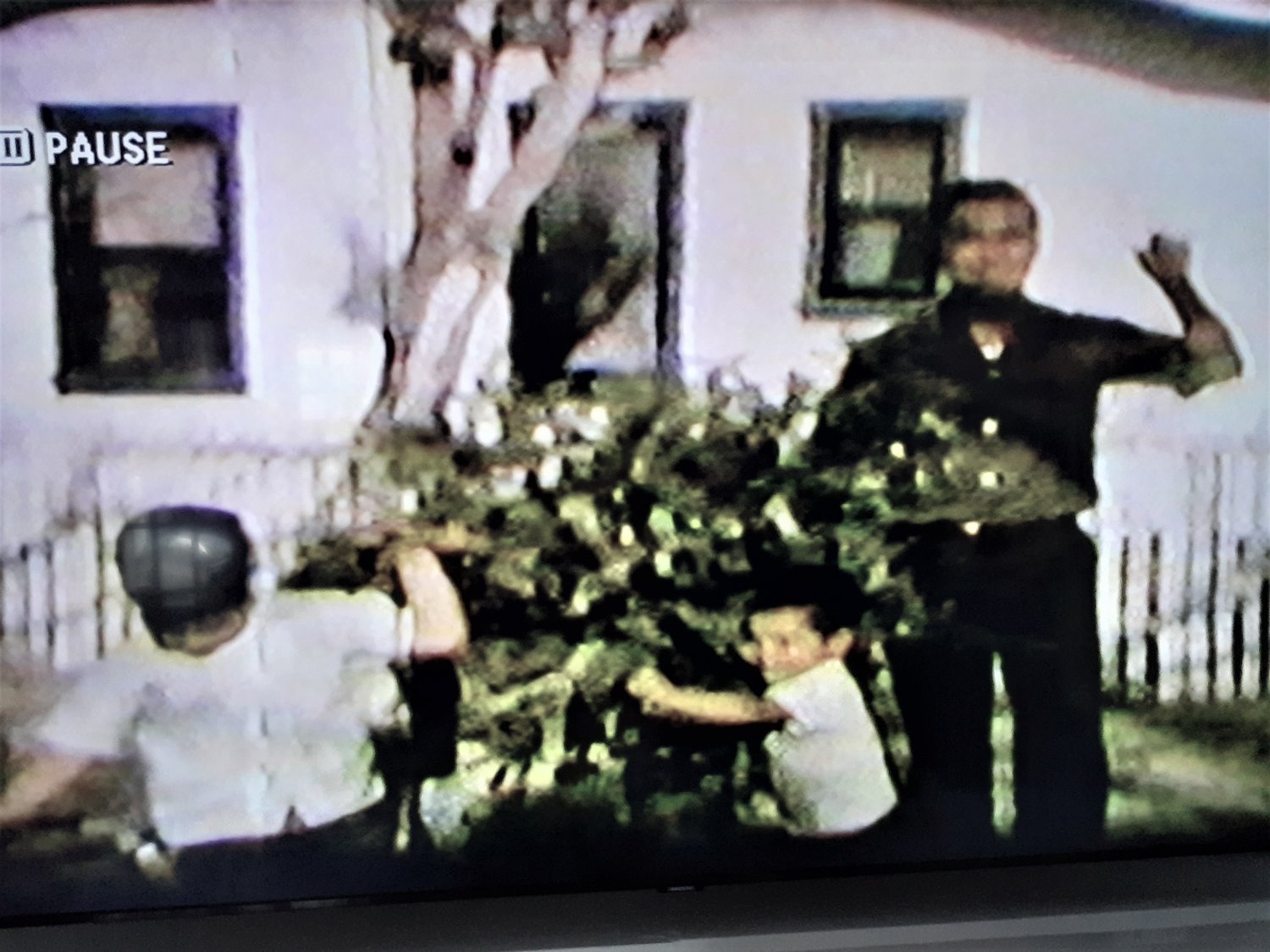 My Dad, Joey and me taking out our Arizona Christmas tree after the holiday season. 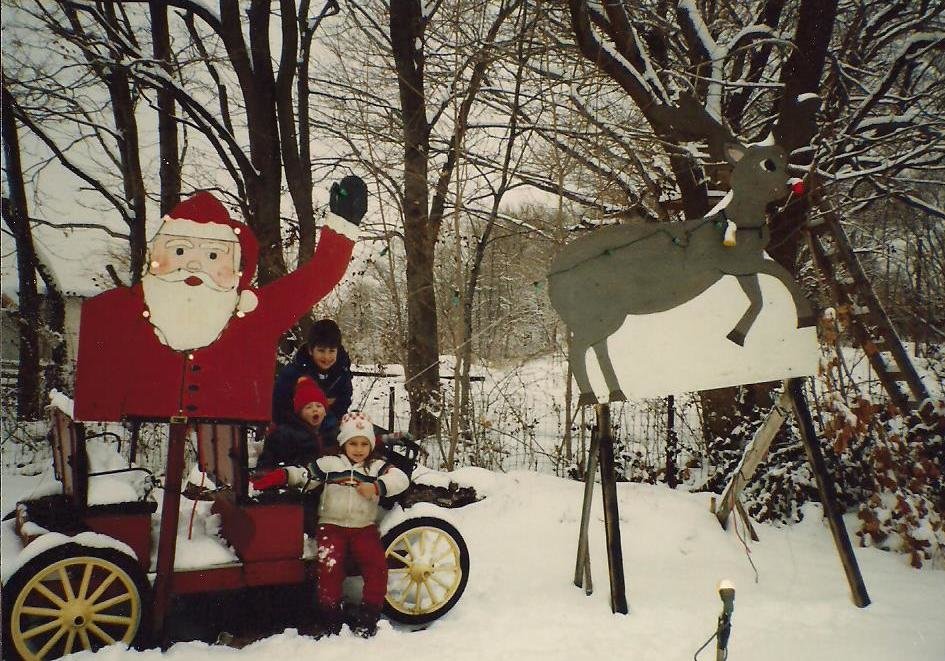 Some yard decorations I made in the 80's. 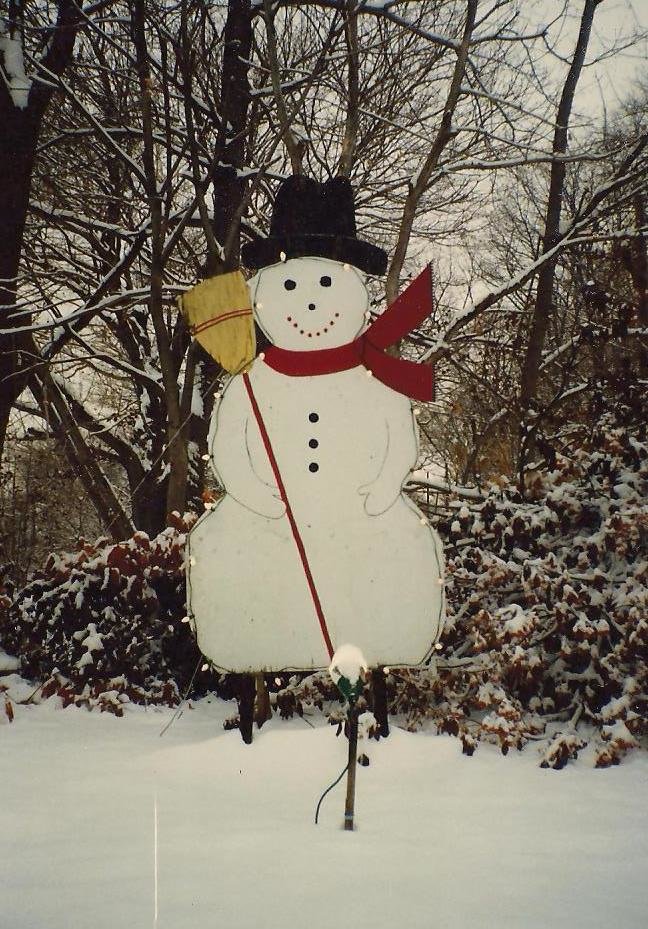 My snowman in case it didn't snow.

Sleigh my dad made which I display every year. 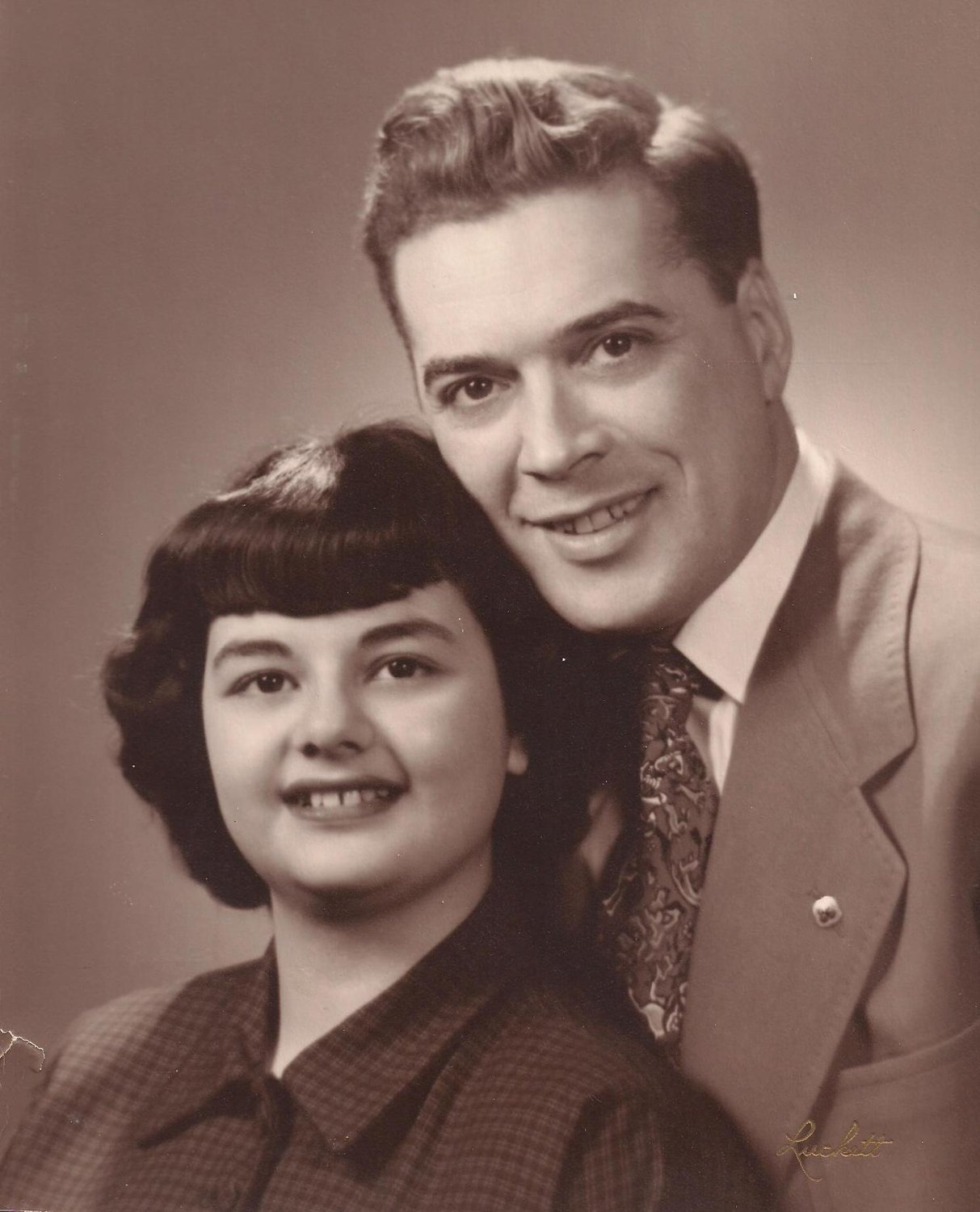 Christmas Eve has always been the best day of the year for me, even though I’m an insatiable beach bum. The excitement would start simmering just after Labor Day and would heat up between Halloween and Thanksgiving. It was a tradition instilled in me from my parents, Bob & Vilma Rodericks. From my earliest memories as a child, Christmas time was very special. My dad would make decorations for our modest Kent Heights, East Providence home and my mom would decorate throughout. The signature piece of Vilma’s holiday was her Christmas tree. While some in our beloved extended family had artificial trees, ours had to be a live Douglas Fir and be tall enough to scrape the top of the living room ceiling. Although I do confess to secretly liking my Aunt Rosie’s pretty white/green tree and the color wheel on my Aunt Connie’s tree. “Douglas Firs are the best,” mom would say. “It is difficult to find a perfect shape, but the needles last a long time and the tree smells so good,” she would tell people. Buying the perfect Christmas tree was an anticipated event by itself. The five of us (I had two younger brothers) drove in our Ford station wagon to the ‘Farmer’s Market’ in Providence where several tree vendors were set up. Mom would lead us through every vendor before selecting “the tree.” All the tree guys knew her well and did their best to sell to her - it kind of validated the quality of their tree lot! My dad would usually buy several extra tree branches for making wreaths and for filling in any bare spots the tree might have. After tying the tree to the roof rack on the car, we would stop at nearby Caserta Pizza on Federal Hill for pizza, wimpy skippies and hot chocolate. The years when it snowed while tree shopping were the best.

The tree would stand on our front porch for a few days to ‘settle’ and it would be decorated on Thanksgiving weekend. My dad would string the big bulb multi-colored lights and then the rest of us would place the ornaments. There were special ornaments dating back to my parents’ marriage in 1950 and a few new ones each year. Generally, my brothers and I would tire and lose patience and my Christmas perfectionist mother would finish the job. Her finishing touch was the hanging of tinsel. It had to be a certain type which wasn’t readily found in most stores. She would painstakingly put the tinsel on the tree, one strand, one branch at a time. Many hours later the finished Christmas tree was admired by all who saw it.

Complimenting the tree was a manger my dad made from branches and twigs found in their yard. He made the manger for mom in 1950, the year they were married. Seventy-one years later that manger, still intact, is with our family. It is truly an heirloom that we cherish. After both my parents were gone, the manger remained with me for many years and was brought out every Christmas. It was like seeing an old lost friend every December. Three years ago, I gifted it to my son so that he could continue the tradition. He, his wife and 9-month-old son now display it in their home. A tradition with no earthly value except family love and tradition.

My mom would cook for days leading to Christmas. Her sisters Rosie, Connie, Etta and others would also cook and bake. The whole Italian Christmas Eve thing was done, complete with fish, lasagna, eggplant, ham, pastries, etc. Hence, I’ve never enjoyed a slim waistline! The excitement level was feverish. It could have been a Hallmark movie. Caroling books came out with my mom insisting that we all sing. Friends and neighbors would come and go all day and night. ‘The Night Before Christmas’ was read to little kids. A pause was observed as some of us went to midnight mass at St. Martha’s and returned home to eat and party some more. Usually, the festivities ended about 3 or 4 in the morning. In later years as the families grew, Santa would visit all the little kids. On Christmas Day the festivities would continue and shift to my aunts’ homes. Once again until late in the evening. It would repeat itself again during the New Year holiday. Our decorations and lights remained on until January 6th or ‘Little Christmas’ as my mom called it. Any excuse to extend the holiday.

My father made lots of things for the holidays. A red Christmas sleigh, wooden candle holders and other hand-crafted things. I have some of them still. I especially love the bright red sleigh which comes out of storage once a year. He also made many of these treasures for other family members and they, too, still cherish them all these years later. And so, I cherish these memories but what I don’t have any more are my parents. I was barely out of high school when we lost my dad. In addition to loving the Christmas season, my parents also loved the ocean. They rented a beach house for a month in Narragansett, RI with an unobstructed view of the Point Judith Light. Scraping together every penny they could, while raising a very middle-class family, they bought the house. A simple cottage for $19K, but it might as well have been an ocean mansion to us. The house was bought in August and sadly my dad died unexpectedly in his sleep, that September 16, 1973. He was just 53 years old. He only had weeks there but really loved that beach house. He made a sign from driftwood that he affixed to the outside of the house. The sign read, “Fiore di Mare,” Flower of the Sea in Italian. He adored my mom and made the sign for her Italian heritage. He built a deck but never finished it. Some years later after mom’s passing at age 57, we were not able to keep the beach house. Story for another day.

But back to the Christmas story at hand. We had lost our dad and Christmas was around the corner. I was only 18 and my two brothers were just 16 and 11. Christmas Eve had lost its glow. Somehow, we all agreed that we would still put up a Christmas tree that year and bring out dad’s manger, sleigh and other mementos he had left us. Our Christmas Eve relatives and friends still came by, but it was very subdued. After mom and other loving relatives passed, Christmas was never the same. Although neither parent reached age 60, I tried to continue the tradition of the eve. It was different but we gave it our best. The years evolved and life went on. There were deaths and divorces and my brother Joe died of cancer at age 59. Christmas Eve still would excite me for our kids and grandkids, but the spirit needed a boost.

That boost for me came when I met Diane. Diane and her family also enjoyed Christmas with a gusto for the holiday. There were new family gatherings and grandchildren, old friends meeting new friends and we once again began hosting Christmas Eve. Many of the great food dishes; meatballs, red velvet cake, butterball cookies to die for and other Christmas delights were back on the table. The manger and red sleigh come out and decorations abound. The last couple of years have been slowed by Covid-19 so our open house invite to all is on hold. Just immediate vaxed family for now. We hope to return to those glory days of Christmas’ past someday soon. The big thing missing is my mom’s tree. No one can find the tinsel she liked and I’ve recently switched to a life-like artificial tree. I know, I know, the horrors! But it really looks nice and after all, farmer’s market in Providence is long gone and I should avoid those wimpy skippies! Some traditions are best kept in memories.

OUTTAKES:
* The year my mom wasn’t feeling well, my dad, brothers and I went to Farmers Market and bought the Christmas tree. As we pulled in the driveway with the tree tied to the car roof rack, mom came outside shaking her head. “That tree won’t do. We’re taking it back now.” She dressed warm and back we went. “I’m not surprised!” the tree vendor laughed when he saw my mom. We came home with a perfect Douglas Fir. She even treated us to Caserta’s.

* For one year when I was 5, we lived in Tucson, Arizona. My dad’s health needs required the dry climate there doctors insisted. It didn’t help after all and missing family and friends, we returned home to EP. But for that one year my parents were determined to have a Christmas as usual. They drove to a desert mountain top where we found snow. Very cool. We then searched for days until we found a big live Christmas tree. Mom, who always made friends fast, invited our new neighbors for the Eve and they loved her lasagna!

* My children never met my dad and only briefly knew my mom. But they fondly remember those early Christmas eves. They often reminisce about those days and my son and his young family proudly display my dad’s manger that he admired as a little boy, along with their live tree! My daughter and husband live in Hawaii now and she also waxes sentimental about those Christmas’ past. She misses the tradition of family and friends’ parties and excitedly looks forward to those few times she has been home for Christmas. I see an heirloom gift in her future soon.

* For a few years I brought a Christmas tree to my parents cemetery every year but got away from that. Thanks to my cousin Doug who usually does this every year. I may stop by this week.

* Our childhood home hosted so many holiday events and yet seems so small when I drive by it now. I don’t know how we did so much there with so little. With not a lot of money and a small home for 5 of us, we never wanted for anything. I guess it wasn’t the size of the house or bank account that mattered but the size of my parent’s hearts. If only they could have lived a little longer. I would have loved for them to have met Diane. Happy Birthday Diane and it is also my late brother Joey’s birthday. Merry Christmas to all!