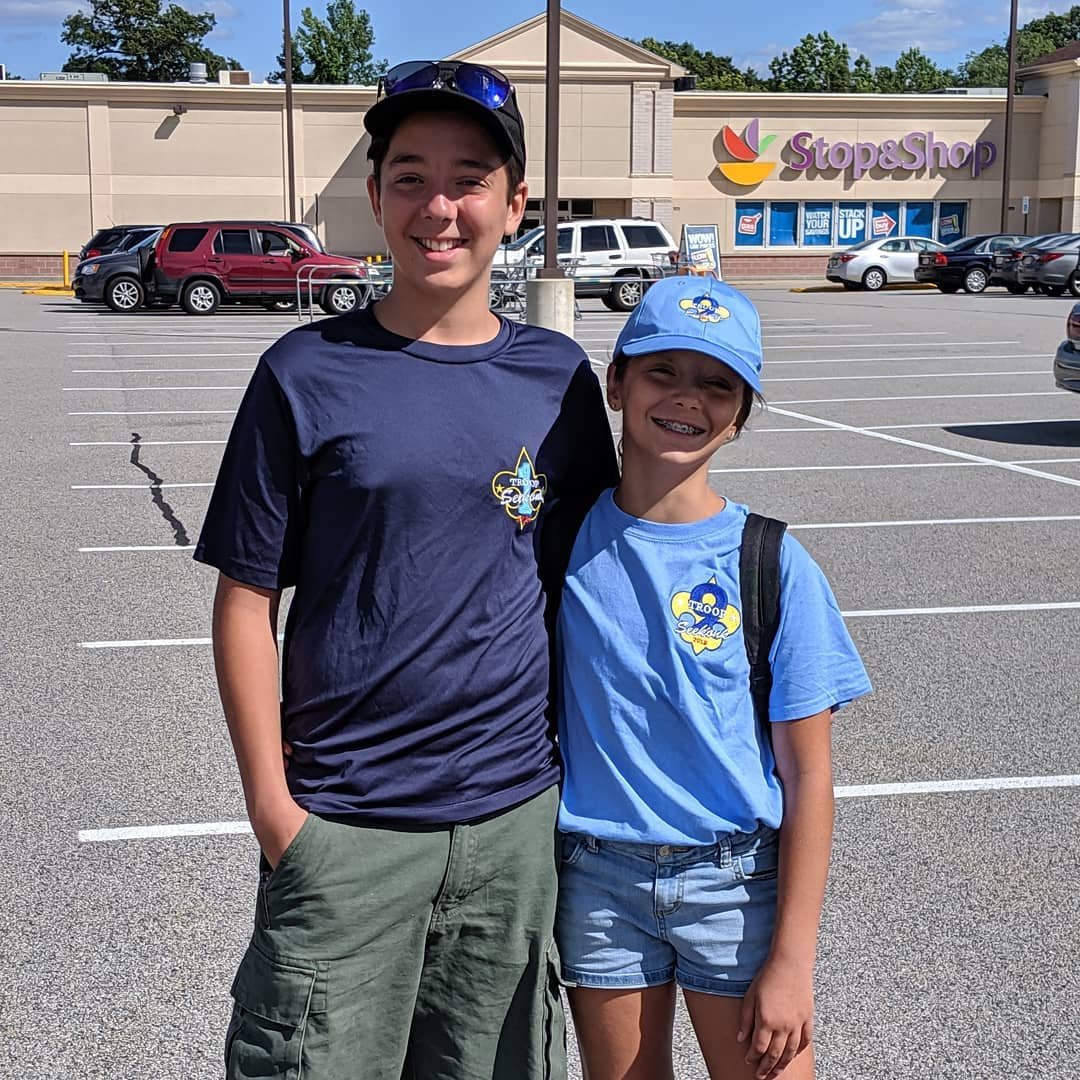 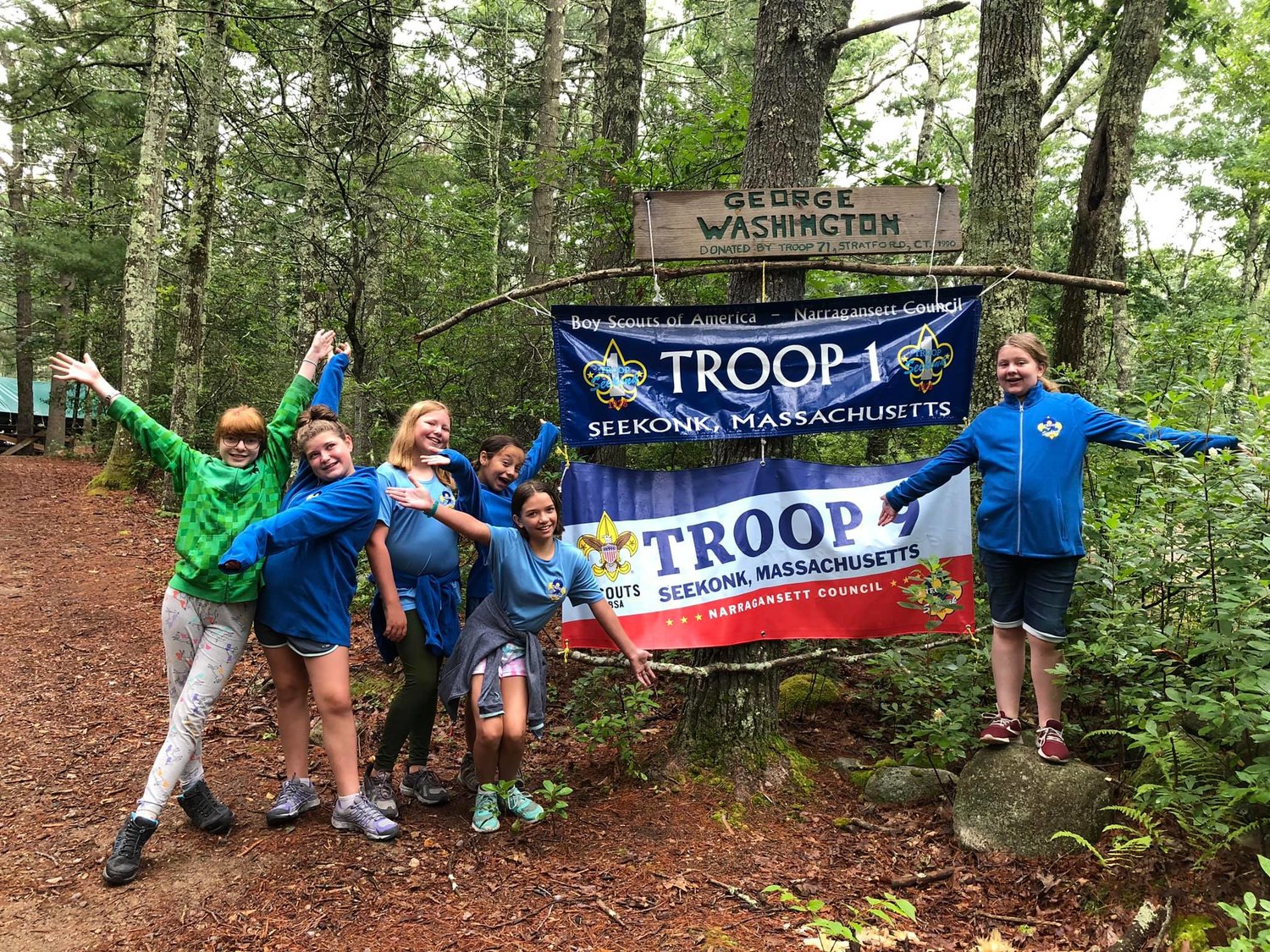 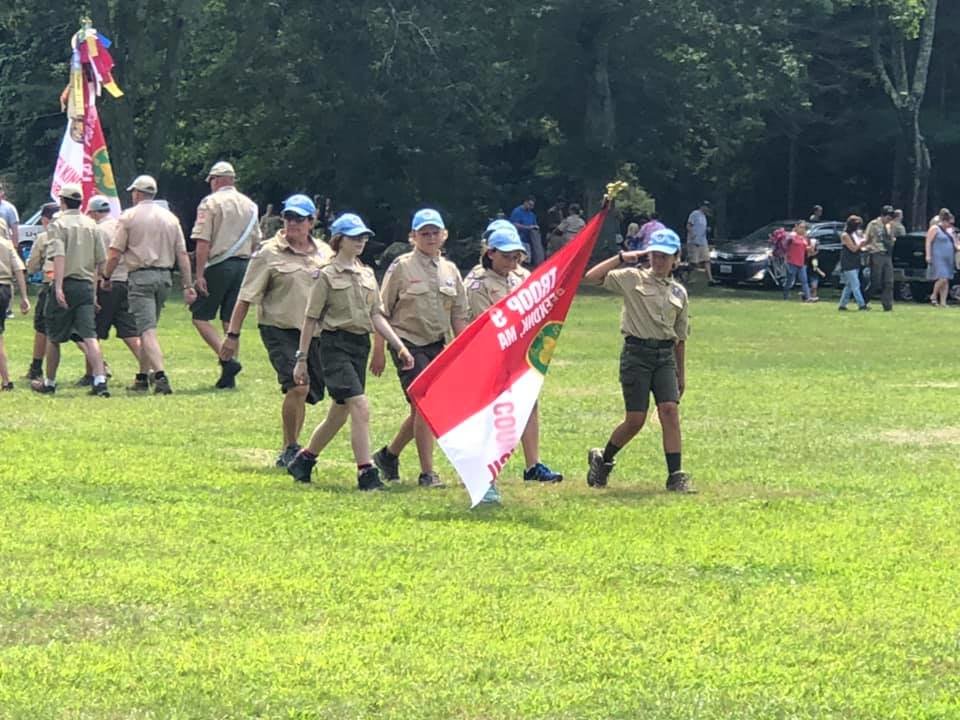 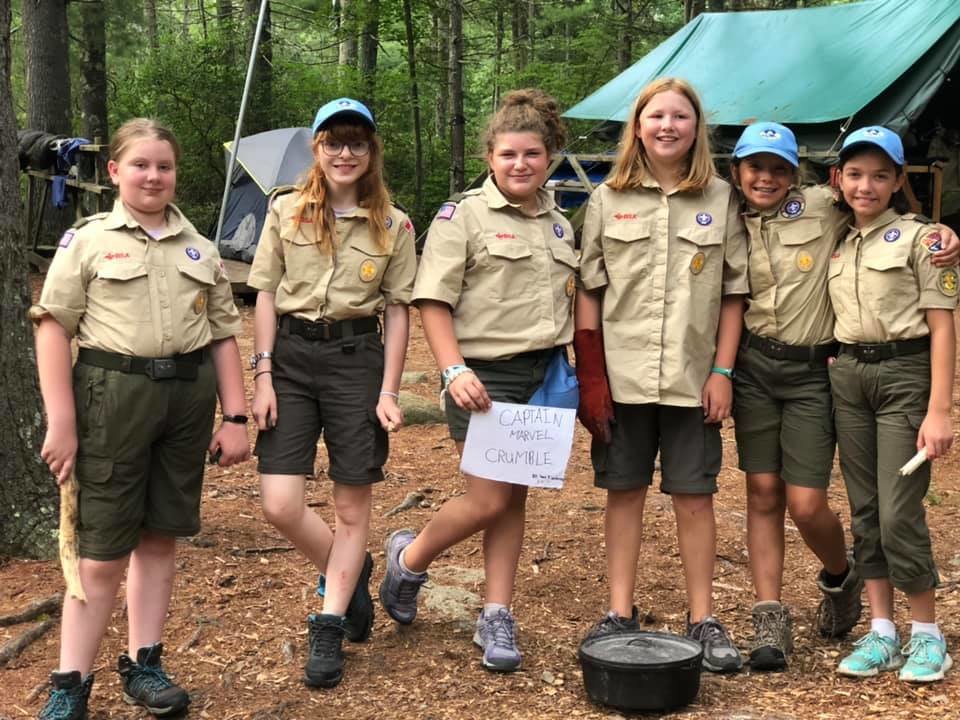 Introduction
My name is Nina Grace, I am SPL (Senior Patrol Leader) of Troop 9 Seekonk Scouts BSA. We are the first all girl troop from Seekonk. My Scout Masters are Mrs. Beth Eklund and Mrs. Kathy Quinn. There are currently 8 girls in the troop. Six girls from my troop went to Yawgoog Scout Reservation, including me. I had ideas about what an experience at Yawgoog was like from stories told by my brother, David Grace, who is a Life Scout rank in Troop 1 Seekonk, troop 9’s brother troop. We had visited David each year during his time at Yawgoog. He would give us a tour of the whole campground and describe everything that he was doing during camp week. I became familiar with Yawgoog. This being my first year, I would get to experience Yawgoog in a whole different perspective. I was eager to go but was nervous about missing my mother. Afterall, I would be there for a whole week. I was also nervous because I was the troop’s first Senior Patrol Leader and this came with a lot of responsibilities.

Expectations and Events
When we arrived to Yawgoog, Mrs. Eklund and I (because I was SPL) went and checked in our troop. We then made our way to our campsite, Camp Sandy Beach, George Washington, to set up our sleeping quarters. It’s what one would expect, a lot of tents with bunks and a large round fire pit in the center surrounded by the tents. Our tent had enough bunks so that all 6 of us could stay in one tent together. After picking and setting up our bunks, I had to attend some meetings to learn what was expected from me as SPL. I had to come up with a list of activities for the troop to do throughout the week. I had to come up with a fire safety chart for maintaining the fire pit so that it is used in a safe way. We also had to make a list assigning chores to be done each day by each troop member. I did this with the help of my Scout Masters, Mrs. Eklund and Mrs. Quinn. After the meetings, we were able to have a fire in the fire pit and play some games.

Every morning we woke up to the sound of the Troop 1 Bugler, Jacob Langille. We came together to raise the flag, say the pledge of allegiance and recited the scout oath and law. Then we headed to the mess hall for breakfast. The mess hall is big and everyone is loud. Whether is was breakfast, lunch or dinner, everyone was loud because there was always a lot of cheering and singing the Sandy Beach Song.

I first thought that Yawgoog pond was small. It’s actually huge! Camp Sandy Beach has the best beach in Yawgoog. We are the only beach to have an inflatable obstacle course. After learning the rules and safety of the beach, we had to take our swimming test. We had to do 4 laps back and forth forward strokes and one lap of backward strokes. Once we passed our test, we all received our swimming tags. We need our swimming tags as proof to the life guards that we could swim in the pond. We swam a whole bunch of times throughout the week.

We also did a baking challenge. All troops can participate. We can bake anything we want and present it to the judges (some of the Yawgoog staff). We made something called the Captain Marvel Crumble. It is a cinnamon cake that we made in a dutch oven. We actually found the 2 boxes of cinnamon cake mix inside the Troop 1 supply trailer. We won the challenge! It was so much fun!

Another fun activity is the scavenger hunt. The scavenger hunt is when you are given a list of strange items to find throughout Yawgoog! We really had to get creative! We had to find a dragon so we used a Yugi-oh card that looked somewhat like a dragon! Troop 1 had a lot of fun and did really well! They had almost everything on the list. Unlike us, we only found about 8 out of 26 things. This scavenger hunt was very hard because we had to look for some things in the dark.

We attended a BonFire with the other troops at Yawgoog. It was a fun night. We learned a lot of songs and watched skits that the Yawgoog staff had put together. Many of us lost our voices from all of the singing and cheering. It was awesome to see all of the scout spirit.

Each camp week at Yawgoog has a different theme. Our week, was Movies. So we decided to dress as the marvel super heroes from the movie Avengers End Game. Thursday nights, we decorate our campsite and everyone wears their costumes to the mess hall where contests for best costumes are held.

The Ceremony
One of the most fun and memorable moments was the dress parade. This was very memorable for troop 9 because it was our first year at Yawgoog. Our parents and family sit along the border of Camp Three Point Field, where the dress parade is held every year. The dress parade is like a show for our parents. All the troops march in one troop at a time and are introduced. Each SPL announces that the troop is present as loud as we possibly can… “SIR!! TROOP 9 SEEKONK IS ALL PRESENT!!” that’s what I had to say. We all dressed in our class A uniforms. It’s awesome seeing the little differences each troop has in their class A uniforms, whether it’s a beret, hat, cap, or different color neckerchiefs. It was awesome seeing where all the troops and scouts are from. Troop 9 received Honor Troop. It meant that we had met all of the requirements throughout our week there.

Overall, Yawgoog was a blast! I got to know so much about my troop more than I did before. I did miss my mom but being with my troop this week helped. Throughout our time there, we worked on badges to help us each rank up from Scout to Tender Foot. We worked together as a team. When I left Yawgoog all I wanted to do was go back. I loved it there! I love being a scout and I’m thankful for the opportunity.

If you are interested in joining BSA Scouts Troop 9 Seekonk, come to one of our meetings to see what we are about! We meet every Tuesday night at Dr. Kevin Hurley Middle School at 7 pm. Email any questions you might have to Troop9seekonkma@gmail.com.