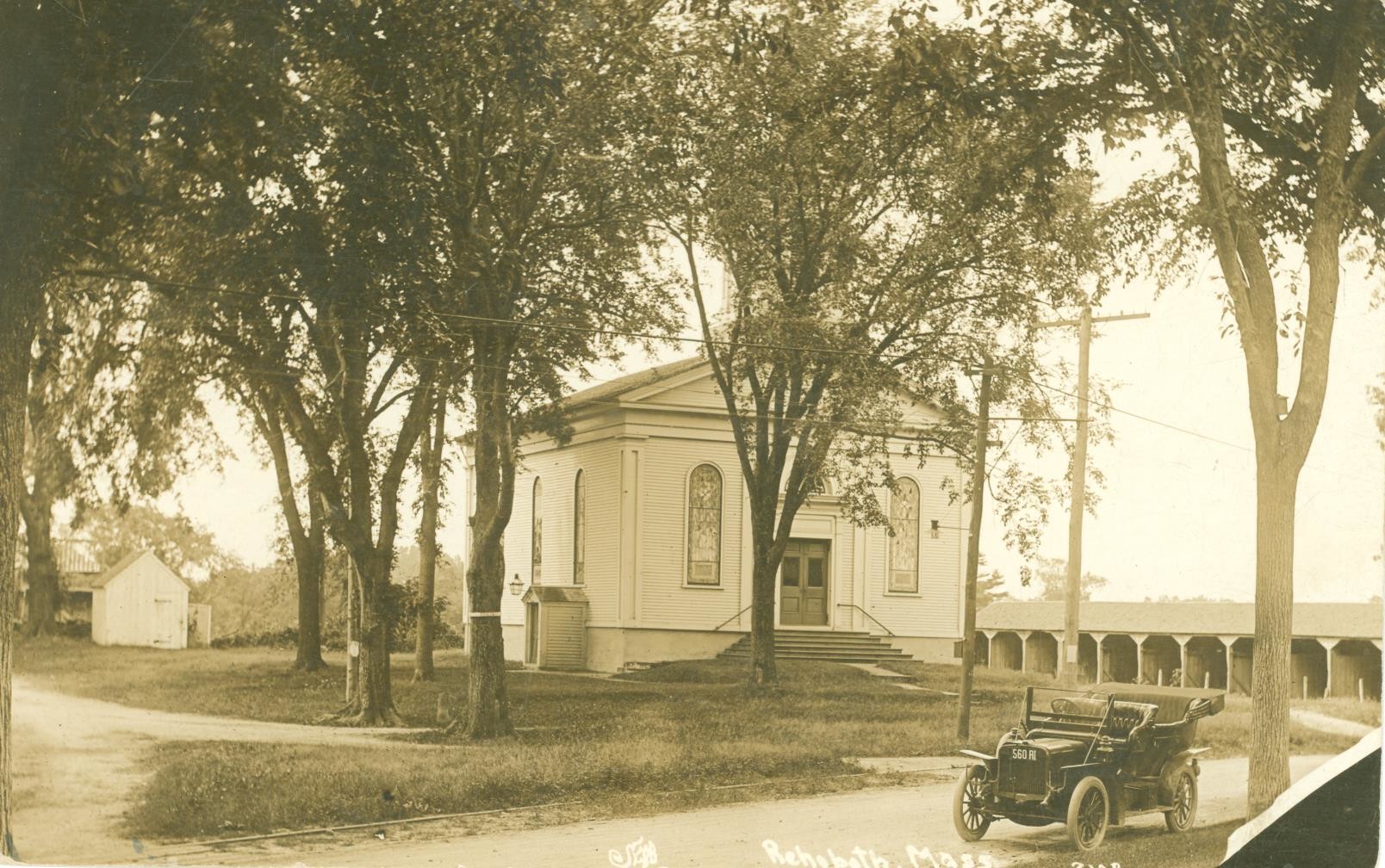 Front view of the Rehoboth Congregational Church circa 1911 with the church carriage shed to the right. The shed was destroyed by the Tornado of 1927, the “Rehoboth Village Twister.” (Postcard postmarked 1911.)
Posted Tuesday, July 7, 2015 4:36 pm

“...carrying about 20 rods (330 feet) in breadth, tearing up by the roots, or breaking the bodies of almost all trees within its compass saving only some small and low ones, and it is thought in all probability to have gone 15 miles in length.””
Rev. William Adams of Ipswich
E. Otis Dyer Jr.

Caution: Here in Rehoboth, it’s almost tornado season. They’re a rare occurrence. But in July/August our town has weathered three tornadoes since its founding in 1643.

The first reported tornado in Rehoboth occurred in August of 1671. If you view the Wikipedia website for Rehoboth, you will see a notation that this was the first documented tornado in America. This is possibly true, although there was a poorly described wind event in the town of Newbury, north of Boston, in July 1643. In the 1600s, the word tornado was not used. Instead, these events were called a “sudden gust of wind,” a “violent hurricane,” etc. The description of the destruction helps us determine if it was a tornado.

Rehoboth Tornado #1: First one documented in America, 1671
The event in Rehoboth in 1671 was clearly described as a tornado. The documentation came when Rev. William Adams of Ipswich was visiting Rehoboth (at the Ring-of-the-Green in Rumford, RI) on October 16th. He and some friends, including Rev. Noah Newman of the Rehoboth Church, drove out to see “the strange effects” that occurred about one and one-half miles from town. Adams described it in his diary:

“...carrying about 20 rods (330 feet) in breadth, tearing up by the roots, or breaking the bodies of almost all trees within its compass saving only some small and low ones, and it is thought in all probability to have gone 15 miles in length.”

From this description, we can tell the location within Rehoboth (likely in current Seekonk and western Rehoboth). Very few people lived in Rehoboth at that time. It is possible that there was no damage to persons or buildings.

Rehoboth Tornado #2: Greatest in Rhode Island’s recorded history, 1838
The second Rehoboth tornado occurred on August 30, 1838. This one is listed as the greatest tornado in Rhode Island recorded history. This event was very well documented by Mr. Zachariah Allen, a businessman from Providence, and others. The tornado struck unexpectedly around 3 o’clock in the afternoon, when many were outside to witness the spectacle. The tornado was much stronger and caused greater destruction than the 1671 event. It started small in Johnston, RI, crossed through South Providence, and across Narragansett Bay heading east. The width of destruction increased rapidly to 600 feet wide and was continuous for 25 miles, without any skipping action.
The tornado passed through Rehoboth along the border with Swansea, across Barney Avenue, Mason Street, Davis Street, and Pleasant Street before crossing Swansea, Somerset, and ending somewhere in Freetown. As it crossed fields, the summer crops were destroyed, the ponds were nearly drained of water, and buildings were crushed and thrown by the tornado. In Somerset, two women in a cart were picked up and thrown into the next field.

Rehoboth Tornado #3: Killer twister, 1927
The third tornado occurred on Sunday evening, July 31, 1927 in Rehoboth Village. This tornado was described as a twister, or a miniature tornado. This storm was witnessed by many people on their way to the Congregational Church to attend an evening service, including many people from the Westville section of Taunton who were arriving by car to attend a union service with the Rehoboth church.

One young man from Taunton, Roland Isherwood, age 19, was driving a car with five other family members and friends. The roof of Joseph Earle’s ice house, situated near the present entrance to the Carpenter Museum on Bay State Road, was ripped off by the twister and flew 300 feet before landing on top of the car. Immediately after, a large tree crashed through the car roof, killing Roland and injuring the rest of the riders. The post office and store beside the ice house was twisted off its foundation. The Church steeple was twisted slightly out of line.
The tornado continued through the village, over the village dam to the front yard of Goff Hall. It broke window panes on the Hall and ripped a wall off a barn across the street, exposing two floors. The contents of the barn spilled out the opening. The old carriage shed beside the Church was flattened by the tornado. It was located where the Church parking lot is today. The remains of the tornado dissipated quickly as it passed beyond Goff Hall on Bay State Road. This tornado was smaller than the previous events, but caused severe damage to persons and property over the local area.

In the chaos, there was an intense rainstorm that paralyzed traffic for a three-mile radius from the Village. Cars had to stop on the roadside as far away as Seekonk to wait out the passing storm. Trees, electric poles, and wires were downed on roads throughout the area. When Taunton police ambulances arrived to take care of the injured, they had to drive four miles out of the way through fields to make it to the scene. The State Police barracks in Rehoboth posted guards throughout the night to keep the curious away.

Since 1927, many damaging hurricanes have struck Rehoboth, but no true tornadoes have hit. The common theme for these three tornadoes was a calm, hot day followed by sudden contact with a cold front in the afternoon, followed by the tornado event. This is something to be aware of as we enter that part of the year.