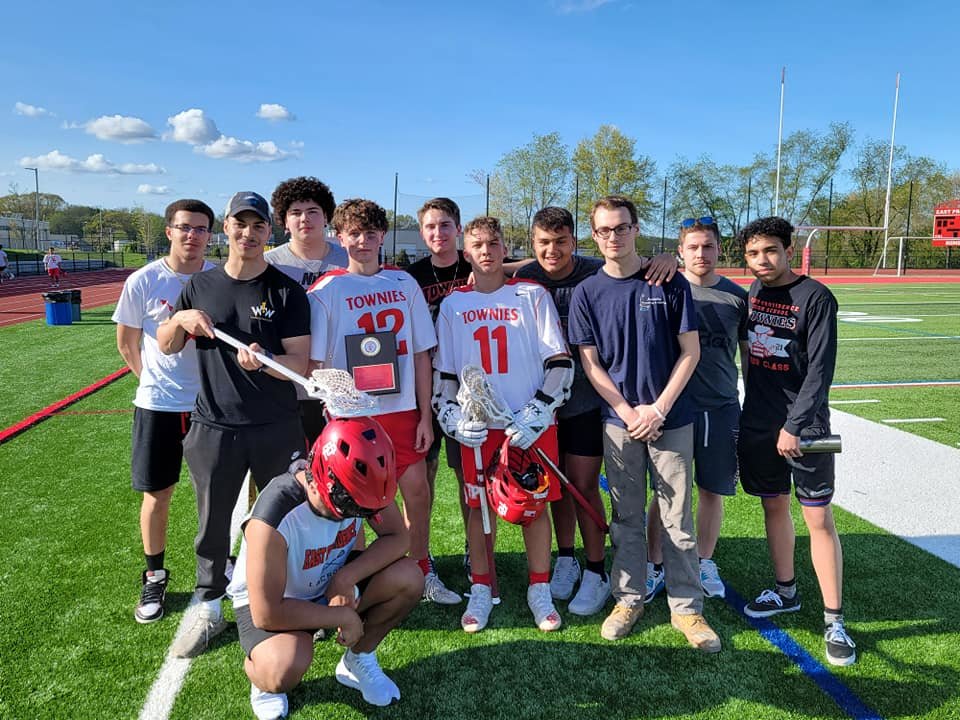 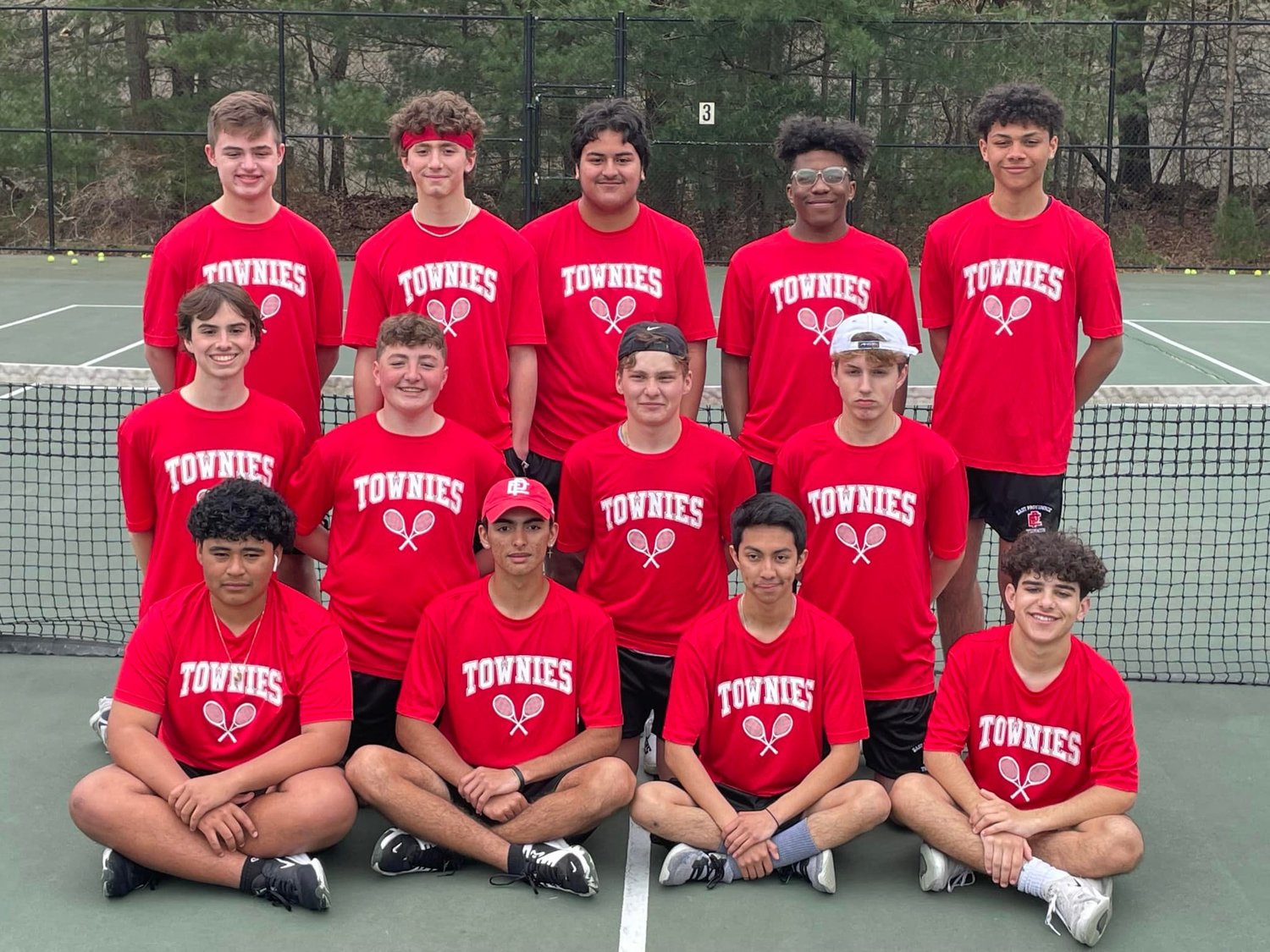 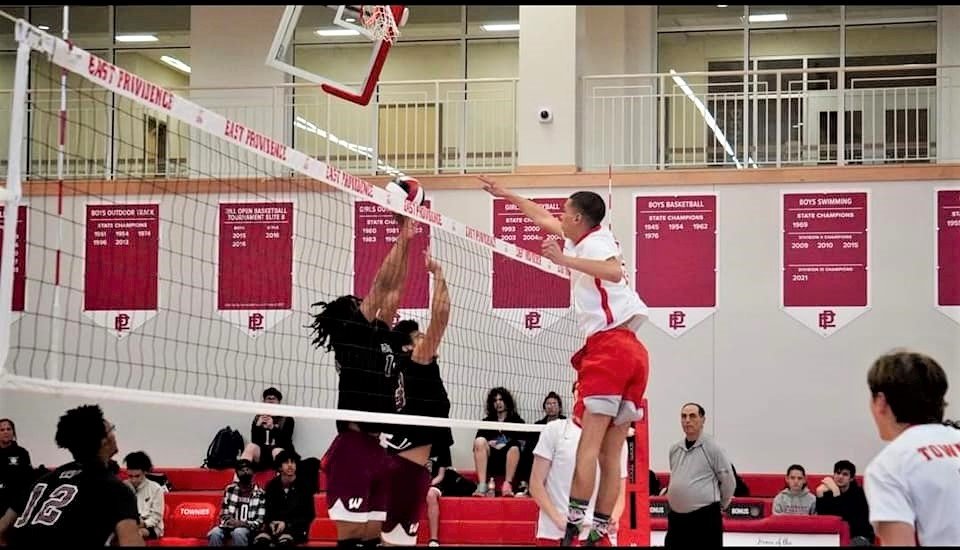 Grant Wosencroft at the net for EP
ephs photo 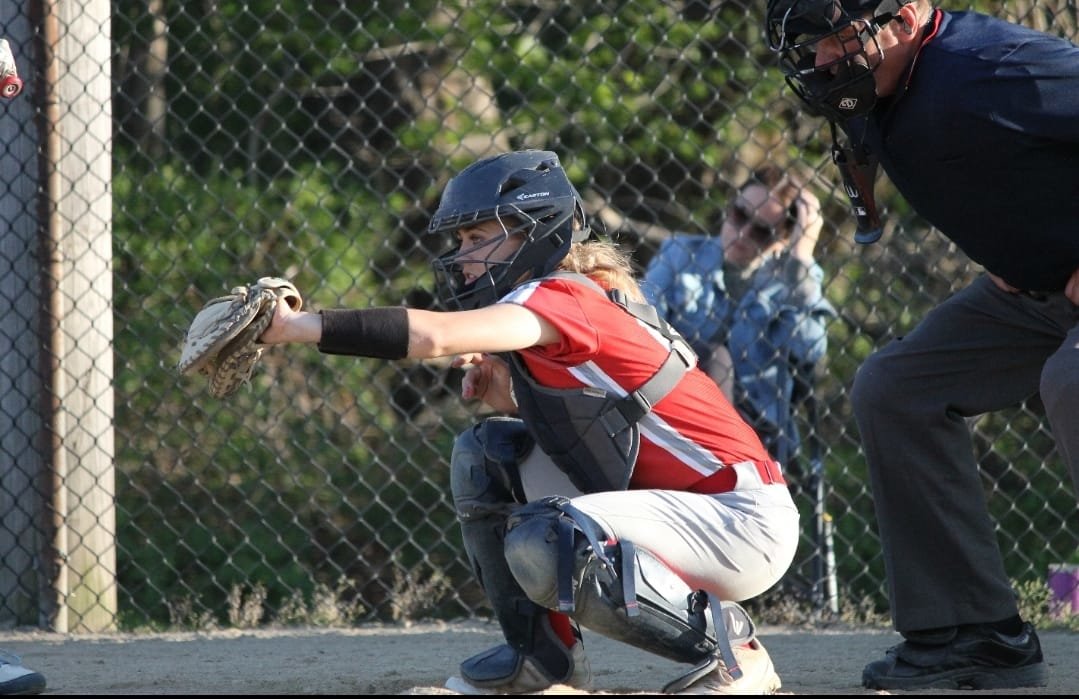 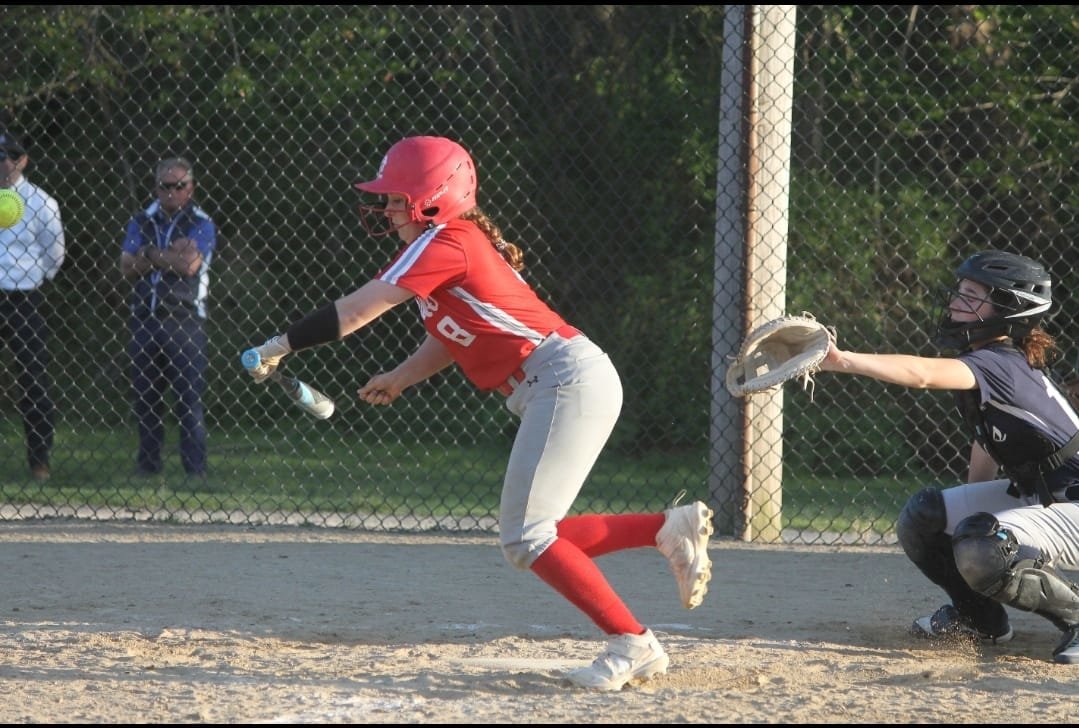 Mackenzie Pimentel laying down a bunt for the Townies
ephs photo 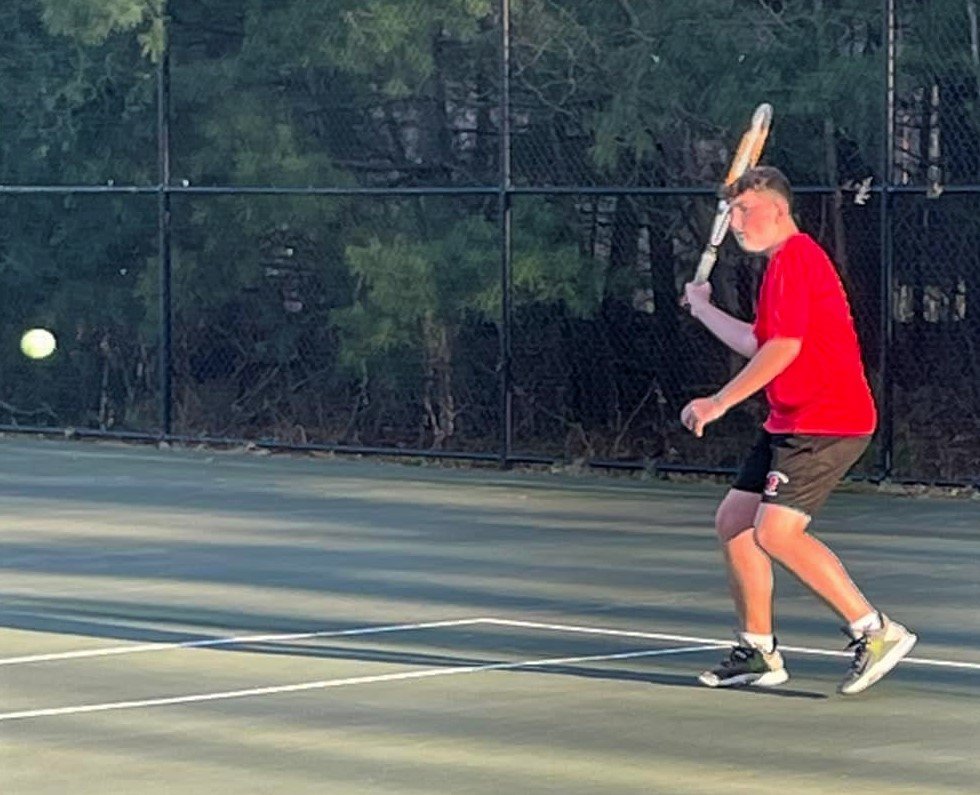 (In no particular order of importance, The EP Reporter presents an East Providence school sports update. The Reporter tries its best to cover as many teams as time permits. If you would like to see coverage of your team or event please feel free to contact The Reporter at news@ReporterToday.com or bobrodericks@gmail.com)

EPHS GIRLS LAX UNDEFEATED:
The Townies haven’t been known for lacrosse through the years but the EP girls LAX squad is putting the rest of the state on notice. Townie lacrosse is alive and well and has a gleaming new stadium in which to play. In fact, they have been quite dominating this year. “This season got off to a great start. I have a very coachable group of girls who have really put in a lot of hard work,” said Head Coach Haley McCusker. “Last year I spent a lot of time focused on the fundamentals of lacrosse, this year I’ve really been able to build and expand the entire game. I’m very proud of the girls and how far they have come, it’s great to see them so excited and to be undefeated! From day one I realized I had a special group of girls. They’re a very coachable group, they continue to grow and develop both the skills and concepts of the game of lacrosse. Their improvement is really based on them, they show up ready to work hard, grow their lacrosse IQ, and give their all to one another every time they get on the field. The girls are just having fun and that’s when they shine,” added McCusker.

The Townies have scored a total of 106 goals while only allowing 33 to date. In a 15-2 win last week over Johnston High, the Townies Ryleigh Grant scored 6 goals and had 1 assist. Kenna Wigginton had 4 goals while Olivia Williams scored twice and Dylan Flynn, Leddy Abigail and Makayla Rebello each scored once. Rylee Jackson turned away the only three shots on net that she faced.

EPHS SOFTBALL:
The Townie Girls Softball Team defeated South Kingstown on an exciting suicide squeeze play, to clinch playoff spot. The 1-0 win was after a defensive 10 inning grind. Keira Quadros pitched a 10-inning shut-out, with 11 strikeouts on the day. The Townies left players on base in 5 of the ten innings, unable to score them to get on the board. “Instead of becoming frustrated offensively, our defense went to work, with impressive infield and outfield play,” said head coach Katie Kenahan. “Keira Quadros had an impressive double play in the 3rd, Ava Mendence threw a runner out on an attempted steal in the 6th, and Gigi Sosa made quite a few impressive plays at third base, including a game saver in the 8th inning. Desiree Fernandes, Abby Hollingworth, and Mackenzie Pimentel each contributed solid defense in the outfield as well,” added coach Kenahan. In the top of the 7th, the Townies picked up a quick first out strike out, followed by two base hits, another strike out, and a bunt to load the bases. With two outs, a hard-hit grounder to short, perfectly fielded by shortstop Sophia Patterson, ended the inning and held off South Kingstown. The game remained scoreless through the 10th inning and both teams started with a runner on 2nd base. After holding South Kingstown in the top of the 10th, the Townies finally came through with a run. “Sophia Patterson was on 2nd base and after an intentional walk of Ava Mendence, Desiree Fernandes bunted a single to load the bases. Freshman Mackenzie Pimental came through with a one out suicide squeeze on a third strike attempt to score Sophia Patterson and win the game,” said Kenahan after the game. The Townies clinched a playoff bid with the win.

In earlier action, the softball team defeated Chariho at home 6-2. The Townies scored in the bottom of the 1st with Vianna Chamberlin starting it off with a two-out double, brought in with an RBI single from Gigi Sosa. The Townies offense exploded in the third inning, starting with a no out in the park homeroom from Senior Hailey Kaiser. Ava Mendence singled with one out, setting up Vianna Chamberlin to hit another in the park home run, scoring herself and Mendence. Gigi Sosa continued her hot streak with a one out single, brought in by the third in the park home run of the game hit by Senior Sophia Patterson. Chariho battled back with an in the park homerun and an inside the park homerun but the Townie defense held them off for the win. Keira Quadros finished the day on the mound with 1 walk and 15 strikeouts.

EP also had an earlier 9-0 win over North Kingstown. Keira Quadros picked up the shut out with 8 strikeouts and only 1 walk at the mound, and went 3 for 4 at the plate with a double, two singles, and 2 RBI’s. Vianna Chamberlin was also hot at the plate, with an inside the park home run and a single. Ava Mendence did well, going 3 for 4 with 3 RBI’s. Desiree Fernandes also picked up a sacrifice fly RBI in the 2nd inning to score the first run of the game.

EPHS BOYS VOLLEYBALL:
The playoff bound Townie Boys Volleyball team earned a hard-fought victory over Westerly on the road. The team dropped the first two sets but showed grit and determination to eventually win in 5. The scores were 15-25, 16-25, 25-15, 25-12 and 15-13. The team was led by sophomore DJ Lepine who played outstanding with 9 kills and 15 assists. Junior “JC” Jayden Cadwell showed amazing leadership. He also had 4 blocks and 5 kills. The team hosts the undefeated Mt St Charles/North Smithfield Co-Op on Monday, May 16th at 6:30 pm.

In other earlier action, the team improved to 10-2 after defeating a very athletic Central team. “We came out slow and took some time to get things going. But Owen Tellier and Grant Wosencroft had long runs from the service line to help seal the win. Kyle Dunn 3 Kills 15 assists and DJ Lepine 5 Kills 5 Digs 5 Assists played well on the right side,” said head coach Dan Cabral.

EPHS Boys Tennis:
The 9-1 Townies boys tennis team continues to roll after sweeping Coventry 7-0. The 1st doubles team of Jayden Amaral and Adam Sullivan snatched the first point with a 6-3, 6-0 win and Jordan O’Hara playing the first time at 4th singles grabbed the second point seconds later with a 6-1, 6-1 win. Nathan Thurber playing at 3rd singles won 6-2, 6-0 and James McShane sealed the deal with a 6-2, 7-5 win at his first time at 1st singles. Closing the courts was Miguel Flores playing for his first time at 2nd singles with a 3-set victory 6-2, 4-6, 10-8 deciding set tiebreaker.

The Townies dialed up a 7 to 0 victory over Central high school in previous action. “That win gave us a record of 4-1 at that time. James McShane gave us our first point with a 6-1, 6-0 win and immediately after the 1st doubles team of Jordan O’Hara and Jayden Amaral grabbed the second point. Shortly after, Nathan Thurber notched the third point at 4th singles 6-4, 6-1. Securing the match was Miguel Flores at 3rd singles. Following along was Jaydon Massa and Jeffry Diaz at 3rd doubles then Alijah Speaks-McSwain and Adam Sullivan at 2nd doubles. For the 7th point, Brayden Rouette took a 11-9 3rd set decision for a great victory!” said Head Coach Paul Amaral.

Until the new tennis courts are ready at EPHS, the Townies have been playing matches at the Kendbrin Swim & Tennis Club in Riverside. Coach Amaral was exuberant in describing a Townie win over Chariho at Kendbrin: “The most amazing come from behind win in my tennis coaching career of 20 plus years was seen by myself and the teammates of James McShane. After losing the first set 6-3 and being down in the second set 5-1, James fought back to win the second set 7-5. In the third set down 5-2, he broke serve and continued to tie the set up at 5-5. Going down 6-5 and down 15-40, he again kept his composure and took the game to go into a tie-breaker where he won 5 points before giving up 2 points and closing out the match with fierce serve that was returned wide and into the net. That match point gave us the 4th and deciding point for the team win.”

On April 11th, EP faced Woonsocket and saw their first 7-0 sweep of a team. “It was a little easy as they only had 4 singles players. However, at 1st singles, Brayden Rouette had to go to a third set to secure the sweep with scores of 7-5, 4-6, 10-4. Nathan Thurber surprisingly, after going 3 sets in his first two matches, was the first of the court with scores of 6-1, 6-0,” relayed coach Amaral.

“Our season started well against West Warwick with a 6-1 victory. #1 singles, Brayden Rouette, finally got his first win after going through a drought his freshman season. Other first victory were had by Jayden Amaral(1st doubles), and Houn Kim and Jeff Diaz(3rd doubles). Closing out the match with a 3rd set victory was Nathan Thurber. This sophomore laden team has a lot of promise to contend in Division 3 this year. Stay tuned as the season unfolds,” added Amaral. “This is a special team. I’m grateful to be a part of it,” said assistant coach Slade Sharma.

Riverside Middle Boys Baseball:
Riverside Middle School continues its quest for a MS state championship. The undefeated squad finished its regular season with a 13-2 win over OLM on Thursday May 12th. The win put the team’s record at 9-0. On the mound for RMS was Ben Hallene and Nolan Lorenz. Each threw two strong innings. Jayden Healey and Kyle Desrosiers led the way with 3 RBI each. Team OBS leader, JJ Renaud reached base 4 times with 4 BB and 4 Runs scored. Isaiah Barden, Nolan Lorenz, and Ean Williamson each had an RBI. RMS starts the postseason next week. Date and time to be announced. The State Championship game will be played at East Providence’s Pierce Memorial Field, tentatively scheduled for June 2nd.