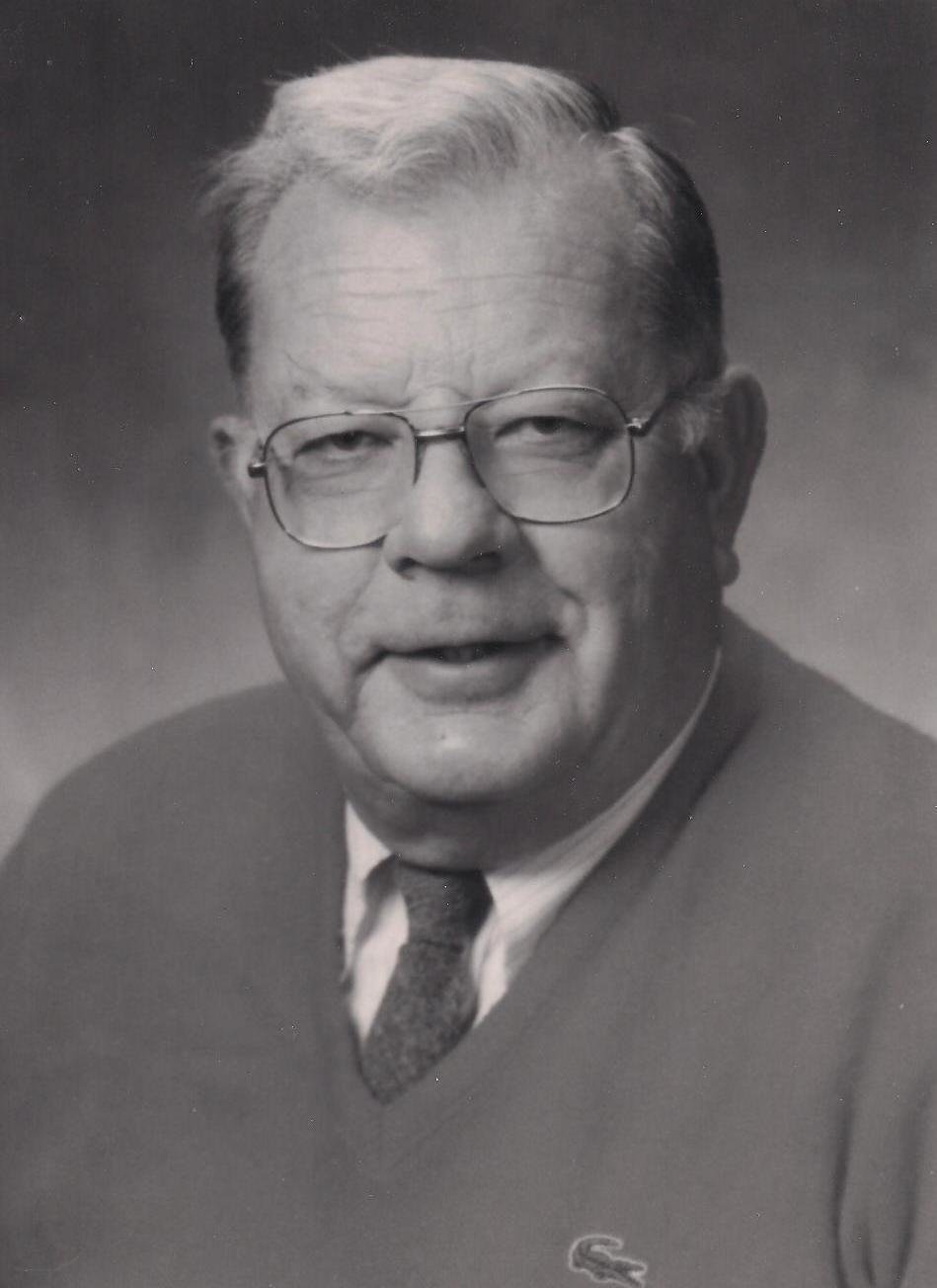 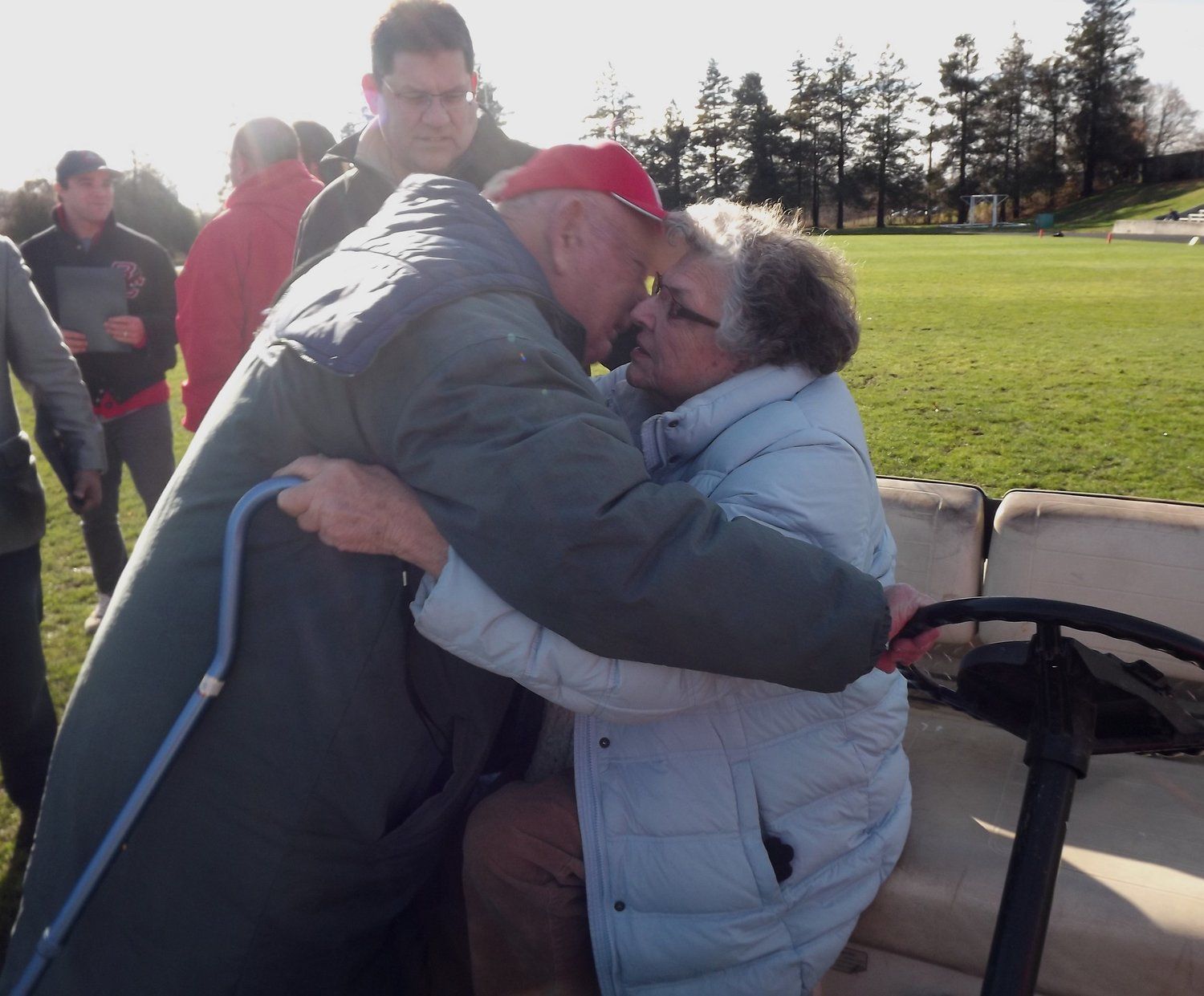 Several members of the Stringfellow family in a ceremony honoring Bill and Sheila at Pierce Field in 2014
Bob Rodericks photo
Previous Next
Posted Thursday, February 13, 2020 8:00 am
By Bob Rodericks

On Thanksgiving Day 2014 the City of East Providence celebrated Pierce Stadium's 75th anniversary and honored the Stringfellow family. Recognizing the state's longest standing Thanksgiving rivalry, East Providence vs. LaSalle, players from the 1940's through the 2000's were represented. A half time extravaganza culminated with the introduction of the Townies Bill Stringfellow and LaSalle's Jim Deffley. Stringfellow, a Townie legend and Deffley coached and taught at East Providence together. Deffley then left EP to coach at LaSalle. The two former coaches embraced and exchanged memories as the crowd loved it. The city unveiled the new sign naming the stadium press box as the "Bill and Sheila Stringfellow Press Box" to the further delight of the crowd. "What can I say," said a choked up Stringfellow. "I am thankful for this and for my great family," as his voice trailed off a bit. Deffley, died in April of 2017 at the age of 90.

Stringfellow graduated from EPHS in 1945, playing football and wrestling as well as being a member of the Townie band. After high school he attended Wilbraham Academy and graduated from Springfield College in 1950. He is a US Army veteran and after his Army service he taught at St. Dunstan’s and then began teaching at Central Junior High School (now Martin) before teaching at East Providence High. Although primarily a football legend, Stringfellow was an all-around athlete and coached a winning Central Junior High basketball team in the sixties. He taught physical education, health and became Athletic Director. Known as an old-school tough guy coach, he was beloved by his students and players. The Townies won back to back state championships in 1969 and 1970 and again in 1979 and 1980. He became Athletic Director in 1977 for the city schools.

Stringfellow was also East Providence's first city recreation director, in a part time post for some 14 years. When he retired from EPHS, he was hired by Hendricken High to coach freshmen football which he did for 10 years. However, whenever EP is playing football, one would always find him, along with the large Stringfellow clan, sitting in the EP home stands in the same seats every year, wearing his Townie red & white. For many years a beloved Townie tradition would see many of his former football players stopping by the Stringfellow home for some of Sheila Stringfellow's famous pies during Thanksgiving week. Many were still stopping by to visit.

Bill Stringfellow’s health had deteriorated since the passing of his wife Sheila in August of 2019. The Stringfellows were married for 61 years. “He is home all the time now but never alone,” said his son Jonathan. “One of us is always with him.” The passing of Bill Stringfellow represents a passage in time. Coach Stringfellow, while remembered as a legendary sports figure, always placed academics first. “String could have been the city’s first full time recreation director, but he chose to remain in the classroom,” said Joseph Crook upon his own appointment as first recreation director for East Providence. Stringfellow could often be seen supporting academic and cultural events at EPHS. He would be in the high school lobby ticket booth selling tickets during holiday concerts and made it a point to support music and arts programs. The name “Stringfellow” and his legacy will be synonymous with East Providence for many years to come.